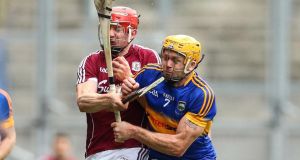 Tipperary’s Padraic Maher clashes with Joe Canning during the 2016 All-Ireland hurling semi-final. Canning and his fellow Galway forwards will look to put the Tipp defence on the back foot on Sunday. Photograph: Cathal Noonan/Inpho

I always think a league final is two games in one. There’s the game for the trophy and the game for what’s coming over the rest of the year. One is about walking away with a title and medal, the other is about getting a psychological start on a rival. What frame of mind will Tipperary go home in on Sunday night? That’s up to Galway to decide.

Tipp can come away thinking one of two things. One, that this is a Galway side that have to be taken seriously because of their physical presence and their ability to use it. Or two, that when push comes to shove, Galway are still Galway – flaky, unreliable, the wrong mindset.

Tipperary are where they want to be. They have the manager, the players, the panel and they are battle-hardened. They are entitled to feel confident that it’s in their hands how long they want to stay at the top and how much they want to win. If they lose here, it won’t scar them. They’ll still be All-Ireland champions and now they’ll have their warning about Galway. It will tell them how much respect they need to give them if they meet again.

So I think it’s fairly clear that Galway have more to prove here. They probably think they’re not that far off an All-Ireland, but really, what does that mean? If you’re not far off, you’re still not there. You may as well be miles off. What are they doing to bridge that gap? What’s different about them this time around? I saw Aidan Harte say during the week that they always back themselves. Well, let’s see it.

The key to this Galway team is their set of forwards. Nobody has six bigger first-choice forwards – Micheál Donoghue can pick six guys who are all over six feet tall. The question is, what are they doing with that size? It’s a great weapon – if you use it properly.

First off, it gives Galway a chance to at least break even under puck-outs. When you’re playing against the two Maher brothers, there’s a high likelihood that at some point in the game, they’re going to dominate from that half-back line by catching puck-outs and driving out with them. Most teams just have to accept that. Galway don’t.

If you have a Joseph Cooney or a Joe Canning in there battling with Ronan and Pádraic Maher, then straight away you have a chance to put them on the back foot. At worst, you have to be breaking those balls and fighting for the scraps. At best, you can make your own catch and get the Tipp lads turning and defending.

Think of the domino effect if Cooney and Canning can get the upper hand under those puck-outs. Not only will Galway spend more time on the front foot, a key supply line to the Tipperary forward line is disrupted. John McGrath and Noel McGrath and Bubbles O’Dwyer will kill any team if they’re getting perfect ball laid out in front of them. But if big Galway forwards can make it messy in around the Tipp half-back line, that gives Galway defenders more time to get set.

Go to the inside forward line for Galway and you have Jason Flynn at 6ft 4in and Conor Cooney at 6ft 2in. The big advantage this gives them is that when Galway defenders are coming out with the ball, they don’t always have to be looking up to find where Joe Canning is. They do still like to funnel the ball through him on the 40 but with such size inside, they know they can ignore him if they want. Even just that small change in mindset makes them less predictable.

It also changes the sort of ball they can get away with delivering into the full-forward line. If you have a tricky inside-forward, he could be a magician with the ball but he will still only be as good as the supply you’re giving him.

Most of the time, that means drilled, low ball, fired in flat like an arrow. To hit that ball properly as a defender, you need that extra half-yard of space and half-second of time and in the biggest games against the best teams, you won’t have either.

But if you have two big, physical inside forwards up the other end, you can hit an area and be fairly confident you’ve done your job. You don’t have to think – you know that at least one of them will be in there, if not two. The flight of the ball will be high and looping so it will give your man the advantage.

My way of marking a big physical forward was to try to change the battleground a small bit. The one thing you can do nothing about is the fact that he’s bigger than you. So it’s up to you to try to make your battle about something other than who can get their catching hand higher in the air.

When you’re marking a big inside forward, your world becomes a small enough patch of grass. There’s no point in a Conor Cooney or a Jason Flynn making a 40-yard run out to the sideline to get a ball. That doesn’t use them to their best effect. Their runs only need to be five or 10 yards in either direction. But those five or 10 yards are important.

If I’m marking a man in front of goal and there’s a high ball coming in, my ideal scenario is him standing right at full forward with me between him and the goal. That way, I know exactly where he is. I can hold him there and buy some time. I can wrestle with him with one hand and either go up and contest it with the other or break it for a team-mate or my goalkeeper to sweep up. Even if we’re one-on-one, I feel I have a bit of an advantage.

But if my man moves even just three or four yards left or right, straight away the advantage has shifted towards him. In terms of balance, I have to be ready to cover off both sides but I’m jockeying across in one direction already so it’s harder for me to switch back if that’s what he does. As well as that, I’m losing my bearings as to where the goal is with every step we take. And I can’t exactly turn around to check if I’m all right – I have to concentrate on the job in hand now.

That’s what the best forwards do to you. They unsettle you and test you to see if you have 70 minutes of concentration in you. And for those Galway forwards on Sunday, that comes down to attitude.

Go back to the All-Ireland semi-final a couple of years ago when they beat Tipperary. There was a moment when Johnny Glynn appeared out of nowhere to get in a hook on Pádraic Maher and it was huge in the game. That’s what you want from Galway’s big forwards. “Not today” hurling.

You think you’re going to go around at your ease here, Pádraic? Not today. Glynn hooked him and knocked him over at the same time and Galway got the turnover and worked a point out of it. The point isn’t whether or not Maher thought any of that stuff. The point is that Glynn wasn’t going to give him time to think. Not today.

That radiates out through the rest of the team. When I think of some of the big Kilkenny performances down the years, that “not today” attitude is always the first thing that springs to mind. Eddie Brennan on Séamus Hickey in the 2007 final when Hickey was up and coming and the next big thing – not today, Séamus. The first two Limerick puck-outs of that match, Tommy Walsh caught one and JJ Delaney caught the other. Not today, lads.

It comes back to whether or not you’re prepared to work hard enough. I often roll my eyes when I hear a manager interviewed after a game and he says, 'Well, we’re disappointed to lose but the lads worked really hard out there'. When I hear that, I’m thinking, 'Yeah, but most of that was chasing after the ball'.

There’s a difference between working hard and doing hard work. Working hard, to me, is getting in there and blocking or hooking one of the Mahers when they’re coming out with the ball. It’s tearing into Tipperary lads and dispossessing them. It’s being an option every time your team has the ball, winning primary possession, fighting for dirty ball around the middle third.

That’s working hard and it’s what wins games. Chasing after a ball that’s already gone is doing hard work to try to make up for the fact that you weren’t working hard enough in the first place. That’s just defending.

So it’s down to those Galway forwards to work hard enough on Sunday. They have the size to cause Tipperary plenty of problems and with the right mindset, I could easily see them winning. But if they don’t work hard enough, they may as well all be five foot nothing.