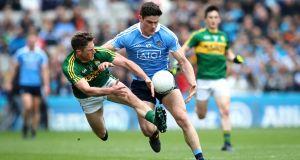 Diarmuid Connolly’s frustration does have the merit of consistency. His unhappiness with black cards predates his recent high-profile acquisition of them and only last December he expressed misgivings about the punishment, saying that he preferred the idea of “a red card for [preventing] a clear goalscoring opportunity, a yellow card for cynical play”.

He also pointed out that he had by that stage picked up just one black card, a tally that doubled in the space of this one month.

The Dublin All Star forward came on as a replacement in Clones against Monaghan and within 15 minutes had been dispatched by referee Joe McQuillan in a decision that proved mildly controversial.

Worse was to follow a week later when having started the league final against Kerry, he lasted half an hour. Having been the victim of a black card foul by Jonathan Lyne in the 27th minute, he managed to incur the same sanction for pulling down Gavin Crowley, ironically the black card replacement, three minute later.

As he had settled into some good-looking form by the time of the dismissal, the loss was acutely felt by Dublin.

At the launch of Leinster GAA’s Beko Club Bua scheme at Croke Park on Thursday, Connolly cut to the chase – stoically aware of where the media’s interest lay – and reviewed the two black cards.

“I looked at the tape back,” he said of the incident with Monaghan’s Karl O’Connell. “It could be construed either way to be honest with you. The referee made that snap call and that’s his decision at the end of the day. So I just have to suck it up.”

He accepted that the league final hadn’t really been a matter of interpretation, more clearcut.

“Yeah, of course. It was frustration on my part rather than anything else really. You look at them, you learn and move on.”

He said he had to have it pointed out to him that he now faces a one-match suspension should he pick up a third black card this year. “To be honest, someone said that to me the other day. I didn’t actually realise it. I’m obviously conscious of it now, yeah.

“I would hope no one would see me as a cynical player. That’s not part of my game. Going forward and attacking is a big part of what I bring to the Dublin team.”

He replies to the suggestion that he – as one of the most gifted forwards in the country – must surely appreciate the dilemma the black card presents to desperate defenders by pointing out that forwards are increasingly falling victim to the rule for what he characterises as clumsy rather than cynical challenges.

“You saw it with the under-21s the last day with arguably Dublin’s best under-21 player of the last five or six years [Con O’Callaghan] playing six minutes of an All-Ireland semi-final.

“Is that a cynical foul? No. By the letter of the law, is it a black card? Yes. So you’ve got to tailor your game, but I don’t think it’s right. I just don’t think it’s a part of the game that we need.”

Aside from Connolly’s personal problems in the league final, Dublin went down to an unexpected defeat against Kerry, flinging the kitchen sink at their opponents in a desperate attempt to recoup the losses of an inert third quarter and running only narrowly out of time by the end.

Asked had the defeat and consequent loss of a record-breaking, two-year unbeaten run been a jolt to the team’s confidence, he acknowledged that the team was almost becalmed at the moment.

“It’s a funny one because it’s the end of the league. We’ve eight weeks now until we can really rectify what went on. You can review it and you can rectify it and you can do this, that or the other, but the reality is you don’t have a game next week to pick yourself up.

“We’re all back with the clubs now. We’ve four weeks with them and four weeks until the start of the championship, but it’s a bit of a funny one. You’re sort of in limbo. But it’s one game. We won’t dwell on it too much going into the championship.”

Putting it out of his mind on a golfing trip to Vilamoura in Portugal was complicated when he found Kerry captain Fionn Fitzgerald and team-mate Darran O’Sullivan and their girlfriends already there.

“We rocked in on Wednesday morning with the golf clubs and who’s sitting there only the two Kerry boys!”

He admits he needed a break – “not for the body, more for the mind” – earlier this year after captaining St Vincent’s to another All-Ireland semi-final, the club’s third in four years, and points out that between football and hurling with Vincent’s, he won’t exactly be on a break, even though the county demands are parked for a couple of weeks.

“Absolutely it was hard to take,” he said about the defeat by Slaughtneil in February. “We had a great run. I want to just thank Tommy Conroy and his management team for what they’ve done over the last five years. I know we’re obviously disappointed not to go further, but in five years, we’ve done three Dublin championships, three Leinsters and an All-Ireland. It’s a massive achievement for a club team.”

Beko Club Bua awards are a new club accreditation and health check system co-ordinated by Leinster GAA and sponsored by Beko. They aim to promote best practice on and off the field in the 800 clubs of the province.