Conor Cooney enjoying a new lease of life with Galway 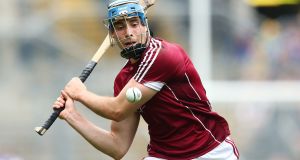 Conor Cooney: back hurling with confidence after a spate of injuries which sidelined him on and off for 18 months. Photograph: Cathal Noonan/Inpho

Watching the grace and ease with which Conor Cooney went about scoring last Sunday – right side, left side, straight down the middle – it would be impossible to guess this was the player who not long ago was struggling to get out of bed in the morning.

Five years after being bounced into the Galway hurling team as a 19-year-old, it completed a sort of second coming for Cooney – only this time with a greater appreciation, and delight, in his game.

He finished with 1-4, not the only difference in Galway’s league semi-final win over Limerick, although certainly the standout performance. Cooney knows Galway will need plenty of that and more to beat Tipperary in Sunday’s league final, but at least he’s fit and happy and that’s good enough for now.

“It was a fierce frustrating period,” says Cooney, revisiting the spate of injuries which sidelined him on and off for a year and a half – breaking his foot not once but twice in 2014 before undergoing surgery on a troublesome hip in 2015.

“You are always given a new perspective after something like that. I broke the foot first, it healed up, and it ended up breaking shortly after again. And I had to go for surgery the second time.

“With the hip then it was at a stage where I’d train and I’d be fine that evening, but the next morning I’d be crippled, and wouldn’t be able to move my hip. I tried rehab for a long time and different things. Rehab, prehab, all the buzz words you want, but it didn’t seem to be doing the job. Our physio Dave Hanley said you’re are better off biting the bullet and I have had no trouble with it since so it seemed to be the right choice.

“I was down in the Whitfield clinic in Waterford to see Patrick Carton and he did a good job on it. It [the hip injury] has become more and more prevalent. I’m not really sure, I suppose it is wear and tear, I had a torn labrum, and an irregularity in the bone, so they had to go and repair that and do a bit of cartilage work and pare back a bit of bone.

“I did the rehab again, and that’s torture at the time, you are just trying to get through it but luckily and I have no trouble since. But you are adding on things all the time you session rather than just going training, pulling on the shorts and pucking a few balls.

“Even the way gym work has gone it’s far more about injury prevention than being able to bench press 150kg or whatever. Trainers and managers are far more tuned in because it did seem to be an epidemic for a while.”

Cooney got back last season and contributed 3-12 from play in Galway’s four championship outings, before Tipp halted them in the semi-final by a single point. That defeat adds further incentive to Sunday’s showdown, a chance to inflict some revenge for last summer’s painful loss and at the same time gain some consolation for missing out on promotion from Division 1B.

“Yeah, it’s a very strange system,” he says, reflecting on the possibility of Galway being league champions yet playing in the lower division next year. Although he’s not complaining, happy out just to be hurling injury free, also well settled into his teaching job at the local primary school in Peterswell.

“Definitely enjoying my hurling more. sometimes when you’re struggling with injuries, just trying to get your stamina up, your hurling is suffering. I’m at a stage where I can get myself to a level of fitness even where I can feel myself that I’m more competitive.

“Look, we’ve been competitive with Tipperary the last number of years. They are All-Ireland champions and you have to respect that. They have been firing on all cylinders all throughout the league, have been frighteningly good, some exceptional forwards and have been putting up big scores.”