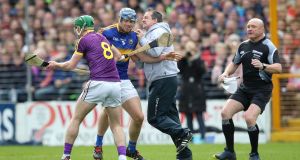 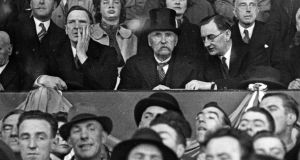 An Taoiseach Éamon de Valera with President Douglas Hyde as Ireland beat Poland 3-2 in Dalymount Park, Dublin, in 13 November 1938. Hyde’s attendance at this match saw him removed as patron of the GAA. Photograph: Getty Images

Has there ever been a more evocative phrase in the GAA lexicon than the vigilance committee?

I was reminded of their noble work when speculation began earlier this week about the possible implications of an eight-week ban for Davy Fitzgerald in light of his incursion on to the field during the National Hurling League semi-final against Tipperary last Sunday.

Seán Moran reported in this newspaper on Tuesday that if Davy were indeed to receive that eight-week ban, he would be barred not just from the sideline for Wexford’s first two games in the Leinster championship this year, but that he would also be barred from taking part in “all functions, privileges and competitions under the association’s control, but not from membership of the association” – in other words, he would be barred from training the team that he has so assiduously built up all spring, for the final two months of their championship preparation.

But who would police this particular rule? In light of the fact that most intercounty training sessions take place behind closed doors these days, this would appear to be a rather thorny question. Is there a law-abiding member of the Wexford hurling panel that would shop their manager in to the authorities, in the spirit of law and order?

The Wexford County Board are the GAA’s judge, jury and executioner when it comes to disciplinary affairs inside county lines . . . but perhaps their dedication to keeping the peace might not extend as far as handing their county manager over to the tender mercies of the CCCC if he was found to be in breach of the above-mentioned rule.

The only possible option left available to us then, is to re-convene the vigilance committee . . . and if even the phrase brings to mind the Stasi, you’re on the right track. The ban on the playing or attending of ‘foreign games’ by GAA members lasted until 1971, as we all know. But the enforcement of the ban itself was quite a thorny proposition, if one stops to think about it for a moment. After all, if a person was seen at a ‘foreign’ sporting event, then the person doing the snitching was also presumably in breach of the ban.

The vigilance committee would prove to be the answer – stealthy bands of Gaels, posing as foreign agents at sporting events to root out non-believers who were dabbling in the black arts. What an imposition it must have been! Attending international rugby and soccer games was a dangerous tightrope walk. Prolonged exposure could have unwanted side effects, after all. I mean . . . what if you started enjoying yourself?

Presumably there was a rotation policy in place – six months of exposure to poisonous outside influences, followed by six months of ‘re-education’, preferably under the strict supervision of Gaels of unimpeachable moral standard.

If you only ever buy one GAA book, I would suggest The GAA: A People’s History by Mike Cronin, Mark Duncan and Paul Rouse. Among the many riches from across the GAA’s entire lifespan contained therein, they publish a letter (via the Donegal County Archives Service) from a Letterkenny man, PJ O’Hare, to the Donegal County Board in April 1933 volunteering for duty on the vigilance committee. His letter begins: “A chara, I shall be pleased to act on the Vigilance Committee to the best of my ability. Shall it be necessary to attend foreign games myself or will it be sufficient to report on the reliable word of an informant?”

His willingness to go through the pain barrier of attending sporting events not directly affiliated to the GAA notwithstanding, the man had a natural flair for his work – by the end of the second paragraph of his letter, he had already brought to book five suspected malcontents.

This obviously attracted a certain kind of character. I have in my mind a Humphrey Bogart-type, gruffly working his way through the seedy underbelly of the Roscommon and District junior soccer league, offering world-weary pronouncements in a trench-coat to a femme fatale who found herself mixed up with the wrong football crowd.

Some breaches of this rule were easier to spot than others. For instance, Douglas Hyde, the founder of the Gaelic League, and a patron of the GAA, brazenly paraded himself for the cameras at an Ireland-Poland soccer game in 1938.

True, he was attending the game in his capacity as the President of Ireland, but that minor extenuating circumstance was of little concern to the GAA. A Connacht delegate raised the issue at a Central Council meeting, Hyde was stripped of his role as patron as a result, and when the matter was debated at the 1939 Congress, a vote to reinstate him was defeated by 120 votes to 11, with five abstentions.

If vigilance committees could bring a sitting president to heel, then surely overseeing Davy Fitzgerald’s suspension will be a piece of cake.