Speculation Jason Forde will be in Tipperary team to face Galway 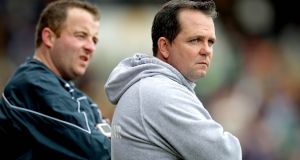 Davy Fitzgerald: faces an eight-week ban proposed by the GAA unless the suspension is appealed. Photograph: Ryan Byrne/Inpho

There is increasing speculation Jason Forde will be named in the Tipperary team for Sunday’s league final against Galway.

Forde has been recommended a two-match suspension for the incident that saw an eight-week ban proposed for Wexford manager Davy Fitzgerald. Both counties are expected to reject the respective punishments and opt for hearings before the Central Hearings Committee.

Tipperary have said they will not be commenting before the final whereas word from Wexford is expected by the weekend.

The deadline for seeking a hearing is Monday morning. Should Forde be selected by Michael Ryan and his management he would be free to play as he is not under suspension until he either accepts the proposed punishment or has a ban imposed by the CHC.

There is a downside for Tipperary and the player in that should he ultimately receive a two-match suspension (the minimum for ‘any type of assault of an opposing team official’ under the Category IV infraction in Rule 7.2) he will have to serve it in the coming Munster championship.

It is believed that Tipperary officials are optimistic about being able to challenge the charge against Forde, who became involved in jostling with Fitzgerald during the Wexford manager’s incursion onto the field in Nowlan Park in last Sunday’s league semi-final between the counties.

If an eight-week suspension (the minimum for ‘physical interference with an opposing player’ by a team official) is imposed on Fitzgerald he will be prohibited from “all functions, privileges and competitions under the association’s control” and unable to involve himself with Wexford until after the Leinster semi-final on 10th June, which is expected to pitch the county against current provincial champions Kilkenny.

His suspension, unlike a player’s, which runs from the most recent match, wouldn’t start until it is either accepted or imposed.

Kilkenny’s Cillian Buckley, speaking at Croke on Thursday at the launch of Leinster GAA’s Beko Club Bua scheme, said that it would disadvantage any team to have their manager suspended and referred to four years ago when his manager Brian Cody was unwell for a number of weeks during the end of the league campaign that season – at the end of which his understudies had succeeded in helping the team retain their title.

“Obviously that would be a huge blow, to lose your manager. Thinking back to 2013, we obviously had great support at that stage with Mick Dempsey and Martin Fogarty but what you’re used to – the routine – breaks a bit. I don’t know if that will be the case. Davy Fitz is still going to be the Wexford manager and he’s going to be running the show down there so I wouldn’t be reading too much into it.

“Look, I think with the energy he brings he could stand on the far side of the county and still be able to run the show. I couldn’t see it affecting him too much no matter whatever happens.”