Tony Kelly turns on the style as Clare ease past Wexford 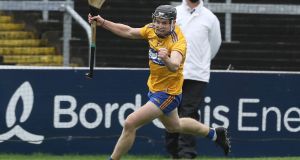 Clare and Tony Kelly turned on the style as they fashioned a comfortable seven-point victory over a disappointing Wexford side in their Round 2 Senior Hurling Championship Qualifier at O’Moore Park, Portlaoise.

While much was made of the Davy Fitzgerald/Brian Lohan off-field saga, it was Kelly who proved inspirational, continuing his free-flowing scoring run in this year’s championship, emerging with a personal tally of 1-15. His 55th minute goal was a thing of beauty as he soloed through the centre of the Wexford defence to fire an unstoppable shot to the net, leaving no way back for the opposition.

Wexford trailed by 10 points at the interval and were beaten by seven in the end, but in truth there was never going to be an escape route as they were flat, failing to improve on their provincial semi-final performance in defeat to Galway. Apart from an early first-half effort there was a familiar feeling about their display.

Clare, playing into the wind, opened the scoring through a Kelly pointed fourth minute free, but the Wexford response was positive, with points from Conor McDonald and a Paudi Foley, who assumed the freetaking role in the absence of the injured Lee Chin.

But from the moment Clare hit the front with points from Cathal Malone and a Kelly free, it was the Banner who assumed control, with Kelly showing superb accuracy from placed balls. He also struck two superb points from play from out close to the sideline, as they gradually built their lead.

The game was a rather tempestuous affair through the opening 20 minutes with referee Liam Gordon busy with yellow cards for both sides, but despite this it was Clare who were showing real honesty in their efforts, controlling matters, picking off some excellent scores, while Wexford struggled to build a real attack of note.

After 20 minutes Clare still only held a slender lead of 0-6 to 0-3, but they managed to step up the tempo of their game as Kelly swung over five superb points, two from play, while Colm Guilfoyle and Jason McCarthy also found their range, and they looked comfortable leading 0-13 to 0-3 at the interval.

Clare didn’t give Wexford a goal chance through that opening half as they grew in confidence, continuing their dominance through the opening second half exchanges and adding points through Jason McCarthy and Kelly, this time from play, extending their lead to 0-15 to 0-3.

Wexford responded with four unanswered points through Rory O’Connor, Shaun Murphy and two Paul Morris frees but they badly needed a goal, with keeper Quilligan denying O’Connor with a fine save.

Clare were more powerful across the pitch, and it was Kelly’s superb goal 15 minutes from the end that really ended this game as a contest as they stretched into a 1-17 to 0-9 lead.

Wexford kept on plugging but there was little cohesiveness in their play, which was scrappy and disjointed, and it was only Morris points frees, along with a couple of long range efforts from Murphy and Foley, that gave the scoreboard a little respectability. In the end it was Clare who were in total control, dominating the game throughout the 70 minutes and securing a quarter-final spot.