Tipperary live to fight another day as they battle past Cork 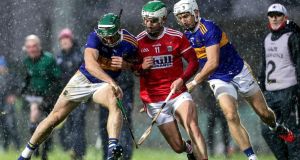 All-Ireland hurling champions Tipperary are through to the quarter-finals of this year’s championship after getting the better of Cork in the LIT Gaelic Grounds on Saturday evening.

The sides were level at 1-16 each after Patrick Horgan landed his eighth point of the evening for the Rebels, who had battled back from five points down after 43 minutes. But when the impressive Michael Breen scored his fifth point of the night for the Premier County, Cork couldn’t find an equaliser and were punished as excellent sub Willie Connors set up Jake Morris for a clinching goal.

Another sub, Paul Flynn, landed his second point to open up a five-point lead in injury-time, with Cork unable to summon another response bar a Bill Cooper point at the death. It leaves Liam Sheedy’s side in Monday morning’s quarter-final draw and, while they will need to improve in areas like a tally of 18 wides, they have time to do that.

With a half-time lead of just two points, 0-9 to 1-4, after playing with the still conditions at their backs in the first-half, Tipp might have been in trouble, especially after registering 12 of those wides in the opening period. While four Jason Forde frees and Breen’s first point had them 0-5 to 0-1 ahead early on, Cork pulled one back with a Horgan free and then, just after the water break, the same player capitalised on loose Tipp play around midfield before haring towards goal and unleashing a low shot beyond Brian Hogan to level.

Cork led twice in the wake of that but, even though Tipp were in front at the interval after finishing strongly through Forde (two) and Dan McCormack, the Rebels were in a strong position as the second-half dawned.

However, while Shane Kingston pointed within a minute of the restart, Tipp retorted with two on the trot as Connors - introduced just before half-time - scored and then forced a turnover for Breen to get his third.

Though Cork had points from Harnedy - the first of five in a blistering second half for him - and a Horgan free, won by the industrious Declan Dalton, Tipp struck for a goal on 42 minutes. Jake Morris was the architect as he picked out Forde with a superb pass and he evaded the clutches of Colm Spillane before unleashing a shot past Anthony Nash.

When Connors set up captain Séamus Callanan for what would be his only point of the game, Tipp were five clear, 1-12 to 1-7, but Cork kept their composure. With Harnedy on fire, they ate into the lead and his third in a row, just after the water break, left one in it with 16 minutes left.

While Connors set up Breen to push Tipp two in front, Cork still came and Horgan, Harnedy and Horgan again were on target to put them in front in the 59th minute. Unfortunately for them, they couldn’t hold off Tipp and McCormack levelled before Paul Flynn took a pass from twin brother Alan to put the Premier back in front.

Horgan levelled for Cork, but it was to be the last time and Tipp had enough left in them to secure the win.