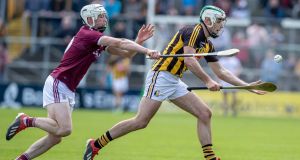 The hurling landscape certainly changed at the weekend but it also took on a familiar look. Both Limerick and Galway answered sceptics with performances that bring them back to the forefront of the contenders.

Kilkenny probably lost a little ground but not too much, given how close the game was and the players they have to come back.

It’s a big ask for a team to go to Nowlan Park and prevail at any stage of the year, let alone the summer. Kilkenny’s stock had risen, maybe because other counties were dropping, but Walter Walsh was a loss.

Galway’s return to form saw a reappearance of the basics they do so well and ultimately their physical power over the course of the match was too much for Kilkenny.

They could even afford Jason Flynn missing a few frees because Cathal Mannion was giving a master-class but at 1-13 to 1-10 going in at half-time with a good breeze to follow, I’d say Brian Cody was happy enough because the Cats were looking under pressure in a lot of places.

They remained under pressure and were very reliant on TJ Reid. Ger Aylward’s recent improvement wasn’t maintained and ultimately his day came apart because of a needless second yellow card. But of the other forwards, only Billy Ryan offered much in the way of intermittent support.

Galway made mistakes but were powerful in defence with Gearóid McInerney and Joseph Cooney emphasising that physical advantage while their forwards always looked to have Kilkenny in trouble.

Paul Murphy was in difficulties from an early stage and I was surprised Tommy Walsh was taken off before him but he had picked up an early yellow card and if he could argue that the second one was soft, he was in a lot of trouble anyway and whatever chance Kilkenny had, 15 on 15, with 14 on 15 they were really up against it.

They fought on and might have questioned the amount of injury-time played but Galway probably deserved it and, at the end, you could see Joe Canning bouncing around, which maybe suggests that he’ll be back around before long. They’re back in business.

The champions are also in that space. Limerick played like a team that knew it was all on the line for them. After 10 minutes they were 0-6 to 0-1 in front and it took 30 minutes for Peter Duggan to get Clare’s first point from play.

Whatever threat there was from Clare – Duggan and John Conlon were improved on the previous week but Tony Kelly was again shackled although he tried hard until the end – it was snuffed out by a magnificent Limerick defence, particularly the full-back line of Seán Finn, Mike Casey and Richie English, who were aggressive and on the ball.

A remarkable thing about them was the amount of hooking and blocking down Limerick did all around the pitch. It was the wrong day for Clare to be trying to improve this year’s modest scoring average because Limerick were applying unreal pressure on the ball.

Will O’Donoghue was a typical example of that focal of physicality but, for me, the epitome was Gearóid Hegarty who has roared back into form in the last couple of matches.

They were able to play a simple game of hitting ball into their full-forward line where Aaron Gillane is an outstanding player. He won ball after ball forcing Clare to concede frees and ultimately the dam just burst.

I had doubts about Limerick’s energy levels this year but this showed that to be a premature judgement.

It’s becoming clear that contenders have to be able to score around 30 points in a match. We’ve seen it from Tipperary and now from Limerick, Galway and Kilkenny. Clare aren’t hitting that mark and it’s hard to see them in the shake-up even if they survive in the championship.

Cork are in that category and arguably they came out of Sunday looking better even though they weren’t playing because the defeat of Limerick is looking more of an achievement.

On Saturday evening, they completed a season of humiliation for Waterford, who battled away initially and the Bennetts in particular resisted for a while. But they were well outgunned by the time Brick Walsh took what may well be the final curtain of a distinguished career.

Waterford have a close season of reflection and discussing the best way forward but what did it all say about Cork?

On one level they did what they had to do – and it was difficult to focus when all the talk was about Waterford and their difficulties – but they also showed some of the same vulnerabilities that were evident against Tipperary.

Their full-back line really struggled, the first one to do so against Waterford’s attack and although their running and off-the-shoulder support and scoring points was effective, Waterford had a way too much possession for John Meyler’s liking.

I think their bench is deeper than last year but for me, the overall performance left nearly as many questions as the Tipperary match and they’re not all alleviated by the rise in Limerick’s ratings.