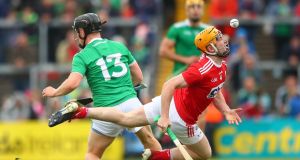 Limerick’s Peter Casey and Niall O’Leary of Cork during their clash at the Gaelic Grounds, Limerick. Photograph: James Crombie/Inpho

The Gaelic Grounds was further proof that in Irish sport you’re always better off skulking into a contest, your ears burning with criticism, than with the glow of medals reflecting in your face.

I got this entirely wrong. Cork had been crushed losing to Tipperary, their confidence bound to be affected, and what looked like questionable solutions in the selection for the match in Limerick.

So credit John Meyler’s management with getting them back on form, and the changes that ended up working perfectly.

Defence had been their most criticised unit in Páirc Uí Chaoimh, but it was transformed. Pride of place probably goes to Eoin Cadogan, who gave an outstanding performance at full back, full of aggression and good reads, but there were others.

Mark Ellis was on the terraces the week before but came in and really solidified the defence at centre back. Niall O’Leary built on his promising debut display, and Mark Coleman had a welcome return to form.

The return of Bill Cooper was also a major plus for Cork, and you were entitled to wonder if last week might have been slightly different if he hadn’t had to pull out before the throw-in.

Even the most puzzling of the selections, Aidan Walsh, had an important impact on the game. Limerick’s big strength over the last year has been how abrasive they have been in the middle third. In the second half, particularly, Walsh imposed himself on the puck-outs and disrupted that influence.

Limerick’s middle eight were swamped by the end and under such pressure that they were reduced on occasion to kicking the ball around on the ground after losing their hurleys. Even Kyle Hayes, who was more dynamic than the others, couldn’t impose himself at centre forward.

Others in that area also stepped up for Cork. Darragh Fitzgibbon was back closer to his best, while Séamus Harnedy and especially Daniel Kearney showed hugely sharper hunger and the one thing they were lacking last day, application – which this time was visibly lacking in Limerick.

Kearney scored some great points, but he also had a bad wide but kept going.

Ironically the one Cork player you would imagine would have had no confidence issues after the Tipperary match, Patrick Horgan, was the one who had an uncharacteristically difficult afternoon. His free-taking went haywire, but he scored some fantastic points as well as the decisive goal.

It was a real swing moment when Cork cleared the ball after looking like Anthony Nash and his defenders were trying to get it into their own net. Once they got moving they put together a great movement to create the chance, and Horgan took it brilliantly.

You were left scratching your head at how with 10 minutes to go, Cork were only five or six ahead. They had experienced adversity early in the match when Conor Lehane had to go off, but Alan Cadogan compensated for that knock to their prospects by posing a real threat, and it was good to see him back for the first time in two championships.

Maybe Limerick can emulate Cork and find form after a bad setback, but they were lacking the quality that made them great last year: the spirit you could see in Graham Mulcahy – who to be fair did well on Sunday – shouldering into Mark Coleman in Páirc Uí Chaoimh or the desire that took them surging past Kilkenny in Thurles.

They’re going to need to rediscover it – fast.

In the early Munster match there was confirmation that if Tipperary were to score in the region of the 2-30 that they did, Waterford were highly unlikely to get near it. Tipp were slicker, and the likes of Noel McGrath, Bubbles O’Dwyer and James Barry had very good games again. There was a step-up from Michael Breen, John McGrath and especially Jason Forde.

They had a cushion on the scoreboard relatively early, but it was also impressive to note the work rate as well as the scoring – for instance Séamus Callanan putting in a great hook on Stephen O’Keeffe in the first half.

To be fair to Waterford they battled and showed great heart, cutting the margin to three, and Patrick Curran was unlucky to hit the post. Yet the tempo of those performance levels was always going to be hard to sustain even without losing Conor Gleeson to a red card before half time.

Eventually the dam burst. Jason Forde’s goal was set up by a great first touch by Bonner Maher, and things began to click. In two matches so far Tipp’s work rate has kept pace with their scoring, and it was always going to overwhelm 14-man opponents.

On the refereeing, I think James Barry could quizzically ask why he was the only player pulled up for over-carrying, and there was a lot of fouling ignored by John Keenan, too much of it on both sides.