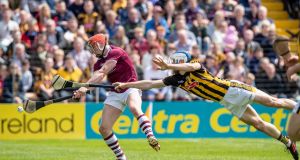 An old story that never wearies in the telling out West: Galway led this for the entire second half, plundering a timely couple of goals, each apparently killing the opposition challenge but by the end it felt as though Micheál Donoghue’s team had been forced to drag 13-man Kilkenny to the nearest crossroads with a stake and a hammer to finish the job.

With the hurling championship attracting lukewarm notices in the second year of the trial format, this fourth-round Leinster contest was epic stuff – three players sent off, amidst 14 cards flashed by referee Colm Lyons, five goals, a gusting wind and a helter-skelter finale with TJ Reid going for it off an injury-time free but watching its trajectory rise above the bar.

There was still time for Richie Leahy to cut the margin to a minimum by shooting the final score of the afternoon, to conclude Kilkenny’s first one-point championship defeat in 20 years.

Reid was immense, a constant threat, and finished with 2-11, 2-4 from play, but Kilkenny were chasing the match from the half-hour mark. He had decent support from two of the younger forwards, Bill Sheehan and Billy Ryan, but they missed Walter Walsh, an absentee with injured ankle ligaments.

Galway were a more varied threat in attack. Cathal Mannion was inspirational, scoring 0-7 from play plus a free when it was decided that Jason Flynn had suffered enough off the tee but there was also creditable returns from Brian Concannon and Conor Whelan, who both finished with 1-2 as well as converted defender Adrian Tuohy, who defied all the pre-match theorising about what he was doing wearing the number 12 jersey by shooting two first-half points.

The result leaves the Leinster table in an intriguing state before next weekend’s final spin of the wheel and all teams, apart from relegated Carlow, can either reach the provincial final or if things go badly, have their summer interest terminated.

It was a fine response from Galway, who in the absence of Joe Canning – badly missed on frees as Jason Flynn had a poor day from the tee – put together their best display of the year after looking less than convincing to date.

“Outside of the group there are a lot of questions being asked,” said manager Micheál Donoghue, “more than are being asked internally. We know where we are at and the level we want to get to – every member of the panel.

“It is just building blocks for us. We are not going to get carried away. Today was a big win, an important win but it is game three for us. We have another big game in six days time against Dublin in Parnell Park. Right now we are all in recovery mode in preparation for that.”

The match started in a tightly-contested, score-for-score vein, breaking open a bit in the 11th minute when Whelan rode a couple of tackles to open up a sight of goal and driving the ball into the net for a 1-3 to 0-3 lead.

An error by Pádraic Mannion allowed Sheehan and Reid combine for a goal four minutes later, tipping the balance back in Kilkenny’s favour and all the more pronounced because they were facing the wind but Galway finished the half strongly and led 1-13 to 1-10 at the break.

With two of the first three points on the re-start, Donoghue’s team were in the driving seat and shortly afterwards things got worse for Kilkenny corner back Paul Murphy, who had been having a difficult afternoon as it was, when his shoulder challenge on Concannon was deemed a second yellow-card foul, leaving his team a man short for most of the final quarter.

Concannon produced the second goal in his marker’s absence for a 2-19 to 1-14 lead, the high point of Galway’s advantage.

Kilkenny mined for goals and replacement Richie Hogan got a 46th-minute ball into Aylward but he couldn’t beat the defence and five minutes later Colin Fennelly weaved in on goal but Colm Callanan pulled out an exceptional save to deflect the shot over for a point.

Galway were beginning to flag, unable to service the forwards into the wind, and a burst of 1-3 – the goal from TJ Reid a product of the length Darren Brennan was getting on his second-half puck-outs as well as his own alertness and lethal finishing – quickly brought the match back into contention.

Johnny Coen, brought in at half-time, was on hand to avail of great work by Whelan, Cathal Mannion and Flynn although he still had plenty to do but measured his shot clinically for a 3-20 to 2-17 lead and was actually Galway’s last score.

Kilkenny characteristically kept coming and John Hanbury got a straight red card for a high challenge on Aylward in the 62nd minute and four minutes later the aggrieved party followed him off after a second yellow.

In the aftermath, Kilkenny manager Brian Cody bristled at being asked about the referee’s decisions but took the positives from it all.

“We’re playing a very, very good team – huge experience, great quality and we lost by just one point to them. We played a fair bit of the game a man down. Our lads fought to the bitter end; that’s all you can look for from a team. Great credit to them.”