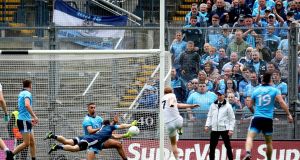 The beatings will continue until morale improves.

Dublin, playing at walking pace, were rarely threatened and never worried. Kildare, the occasional bout of have-a-go brio aside, might as well have been kicking into a cliff-face. Stephen Cluxton became the first ever Gaelic footballer to make it to 100 championship games. He may be the only one who remembers it for anything.

Cian O’Neill said afterwards that a 15-point margin didn’t reflect the game. It would have been a needless intrusion on private grief to press him on what he thought might make a more apt reflection of the gulf between the sides.

He could, it’s true, point to the fact that the ever-lively Ben McCormack had a couple of goal chances and that Cluxton had to smother a Keith Cribbin effort in the second half when they were only the eight points down.

But against that, Cormac Costello could have a had a couple of goals himself only for he made a hero out of Mark Donnellan between the Kildare sticks and Brian Fenton blazed a goal chance over the bar.

No, 15 points felt about right in the end. Costello finished the day with nine points from 12 shots, Paul Mannion helped himself to seven from 10. Ciarán Kilkenny looked a bit out of sorts and picked up Dublin’s only yellow card but still he went for his supper with 0-3 against his name. Fenton flitted in and out here and there, Jack McCaffrey and James McCarthy hardly broke sweat.

For Kildare, this was nothing new of course.

They went 35 years without losing by a double-digit margin to Dublin and now they’ve done it three of the last four times since 2013. The other time, they lost by nine. Their average defeat to Dublin in the Jim Gavin era is 14.8 points.

There’s a whole generation of Kildare footballers who know no other life when it comes to playing Dublin than being on the end of pile-on hammerings in an echoey, emptying Croke Park. At least they know how long the scars last.

They were presented with their fate early here.

Dublin were 0-7 to 0-1 ahead after 12 minutes and only for Donnellan pulling off the first of his saves from Costello, it would have been worse. Mannion was in full cry in those opening exchanges – inside the first 10 minutes he scored two points from play, played the last pass for two more and chased back for a tackle and turnover on his own 45.

To Kildare’s credit, they at least made shape in rejecting that fate. McCormack gave Mick Fitzsimons a nightmare afternoon, regularly taking him on and skipping past him.

After putting up a couple of fine long-range points to cut the margin to three, McCormack zipped in along the endline in the 25th minute to see the whites of Cluxton’s eyes. Sadly for Kildare, he saw the whites of his gloves too and the Dublin captain smothered his shot.

Meanwhile, Dublin ticked and tocked merrily away at the other end. Mannion set up another for Costello, Kilkenny and Con O’Callaghan popped up for a score apiece. It was only Dublin carelessness that stopped them running away before half-time – they actually went 10 minutes without scoring at one stage, against which there is surely some sort of Leinster championship by-law.

The 0-11 to 0-7 half-time score hinted at a future that wasn’t there. Any chance Kildare had of clinging onto the Dublin coat-tails evaporated when McCormack got through on goal early in the second half but pulled his shot wide at the near post without stressing Cluxton.

Dublin punished them accordingly. Mannion, Brian Howard, O’Callaghan (twice) and Costello all filed their boots. By the time Cluxton made his second save in the 51st minute, this time from Cribbin after more good work from McCormack, the score stood at 0-18 to 0-9. The Hill gave its lustiest cheer of the day for that one.

“We knew going into the game how potent the Kildare forwards can be, if given space. There would be a lot of respect among both squads. They played a lot coming up at underage level and in the college environment – the Trench and Sigerson Cup.

“I could see that honesty and respect from the Dublin players over the past few weeks getting ready for this challenge. Kildare showed what they can do. They penetrated us for a few times and could have come away with a couple of goals. That would have put a different dimension on the game. We’re just glad they didn’t go in.”

Ho-hum. They didn’t and the feasting went on at the other end. Mannion and Costello were in Supermarket Sweep mode, helping themselves to anything and everything that was put in front of them. Kildare barely laid a hand on them and as the rain started to come down, the day had long since fizzled in the mizzle by the time Conor Lane whistled up proceedings.

Japan to begin letting Olympic athletes in from next month – report 21:24
Formula One revenues fall 43% as pandemic takes its toll 21:19
Bundee Aki and Connacht get out of jail against Benetton 20:59
Make or break for Eddie Jones and England against resurgent Wales 20:30
The weekend’s Premier League team news 18:23
Crossword Get access to over 6,000 interactive crosswords