‘I am emotional because I know the work those lads have put in, they fully deserve it’ 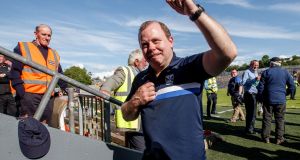 It was a glassy-eyed Cavan manager Mickey Graham who entered the little ante-room of Clones soon after the final whistle blew, signalling as it the first time his county were back in the Ulster final since he was a young forward barrelling around the place.

There was little anyone could do but just ask Graham if he was overcome by the thought of guiding his county to an Ulster final against Donegal in a fortnight for the first time in 18 years.

“Of course I am. I am a Cavan man and I have seen more bad days than good days. I was lucky as a player to be involved in two Ulster finals in 1997 which we won obviously and 2001 as well.

“It is a long time for a county like Cavan who have great tradition. I am emotional because I know the work those lads have put in because they fully deserve it.”

His team survived two early goal chances for an Armagh side that looked they were really in the mood in a strange opening five minutes, before Cavan really copped that the game had started.

Once they found their feet, they discovered that Armagh were all over the shop. Orchard county manager Kieran McGeeney had brought in Charlie Vernon to play full back in the absence of suspended sweeper Brendan Donaghy, but Cavan decided to push up and Gearoid McKiernan went to town on it. Before half an hour had elapsed, McGeeney recognised his folly and ended Vernon’s torture.

By that stage, Cavan had taken an almighty leap forward. They scored nine points that was only punctuated by one Armagh response. Niall Murray was on his frees and Raymond Galligan ambled forward to slot one from distance.

Armagh rallied and got it back to 0-8 to 0-11 by half-time, and there came a period midway through the second half like they might have been on the cusp of something special with substitute Stefan Campbell making a huge impact as they brought it to 0-16 to 0-17.

When Jamie Clarke had the ball in his hands, Cavan defenders were reluctant to get anything on him or be taken for a shimmy. He played Mark Shields in with a typically daring run and a handpass, but the Whitecross man put the head down and blasted the ball over the bar when a goal would have been all the impetus they needed to strike for home.

That was as good as it for them. Cavan showed enormous reserves of composure to hit six of the last seven points.

Dara McVeety showcased his nimble footwork to ride a few challenges from Paddy Burns to slot over. Conor Moynagh left his sweeping role to nail a second of his trademark outside of the right boot points. Cian Mackey skipped 50 metres and rode three hefty challenges to put four in it.

The sheer maniacal desire of Killian Clarke to give an option for a Moynagh free deep in Cavan territory with the Armagh team pressing, was what it was all about. He wrestled his man out of the road, transferred the ball to McVeety and the Crosserlough took his tally to four from play.

As the Armagh crowd flowed freely out of the gates, the spirit of the team evaporated.

The secret to their run was in the lessons they picked up in six tough beatings in the top-flight, some of them during a period when Graham was double-jobbing with Mullinalaghta.

“In the heat of battle, that’s when you need the right men on the ball,” said Graham. “During the league, we weren’t doing that. We were giving the ball away cheaply when we found ourselves in positions to win games and it cost us. But by God have we learnt in Division One this year. We learned about composure, how you get punished against the top teams when you don’t take the right options.

“And that was a hard learning curve but it stood to us in this Ulster Championship.”

Perhaps they did ride their luck at times, especially with the Armagh goal chances. But 23 scores is enough to win two Ulster semi-finals some years. They’ll enjoy this for now.