Nicky English: Deserving champions make history with plenty to build on in the future 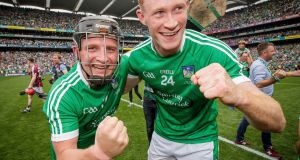 There’s no disputing that Limerick are deserving champions after this most remarkable of championships. From the word go, they had the edge in terms of energy compared to Galway, which might have been expected. But in all the key metrics – possession, going to the ball and creating chances – they were the superior team.

The day got to them as well, a little bit, and their early wides from all kinds of angles from the half-back line and elsewhere showed how they weren’t choosing the right ball with the same precision they had showed in the semi-final.

They almost reverted to league form which had seen them knocking up big wides totals, and that undermined them in the first half, and even though they led by four at the break, it could have been more. Then the goals came and seemed to confirm that this was their day – until the ghosts of 1994 somehow appeared and gave them a chilling final few moments.

It was unbelievable that a Galway team, which had looked so down and out for most of the afternoon and well beaten in most departments, actually had a free to draw the match. Limerick went into free fall, hit some crazy wides and Graeme Mulcahy gifted Niall Burke a score to bring it back to within a point.

To be fair to Mulcahy, he had the composure to get the ball and the point that effectively won them the match by restoring a two-point lead. It showed once again the resilience that Limerick have demonstrated all year. They were under massive threat but found what it took to win just as they had been doing throughout the league and at critical times in this year’s championship.

They certainly wouldn’t have deserved to lose – or even draw – and although the PA ended up playing Dreams by The Cranberries, you’d imagine the Limerick crowd had been having nightmares of 1994, as Galway found that late surge.

They were better all around and, when you consider that two of their full-back line had to go off (on Sunday’s form, Mike Casey was a particular loss, and remember how disruptive changes there proved to be in Ennis against Clare last June), it was a very creditable display.

Declan Hannon had the better of Joe Canning for most of the day until the end, whereas Cian Lynch – whose hard work covering and getting forward was again a big influence – and Darragh O’Donovan held their own, although David Burke got his customary three points.

The forwards mixed the sublime with the ridiculous, but that was to be expected. They are young players with huge potential and that was also evident in performances such as that of Kyle Hayes in the early second half, which was outstanding.

Gillane and Flanagan showed desire in their hunting for the ball and, although you could sometimes question their decision-making, their first touch and commitment to work, and their honest application to turning up for the next ball, is a testament to their work and John Kiely’s success in moulding a side that in some ways isn’t typical of Limerick.

They’re classy hurlers, particularly in the forwards, and that hasn’t always been characteristic of Limerick. They also have plenty of back-up with Peter Casey and Shane Dowling, who got another great goal for them off the bench and just at a time when Galway had generated a little bit of momentum. It’s again unusual but the defence isn’t as well resourced.

If this team can deal as well with the success of winning the All-Ireland as they did with the pursuit of it, they will be around for a long time, but right now it’s some notch for a young team to have on their belt.

It was disappointing for Galway. They looked lethargic for long periods and when they managed to shake themselves out of it, they used the ball badly and hit a lot of wides themselves, which undermined them as well.

So while Limerick looked nervous because of their inexperience on the big occasion, Galway developed their anxiety through not being at their best and their inability to turn things around.

At one stage Cathal Mannion was being taken off and Conor Cooney thought he was being replaced, which didn’t say a lot for his state of mind or confidence in his own display.

Pádraic Mannion gave a manful performance and David Burke got his couple of points, but didn’t impact much beyond that. Conor Whelan wasn’t on enough ball while Jonathan Glynn was in and out from 12 to 14 but well marshalled. You couldn’t say they got a good supply of ball but they never looked likely to create enough.

Their scoring has dried up over the past couple of matches and, but for a brief period against Clare, there hasn’t been any improvement since they looked so impressive against Kilkenny in Thurles. Those replays probably sapped energy in recent weeks and, even though they finished better in the final, they were lethargic for most of the afternoon.

For me the league win over Galway in Salthill remains a pivotal result for Limerick. They hit 25 wides that day and 20 on Sunday, so they have plenty to work on, but for now they can enjoy a fantastic and well-deserved All-Ireland title.