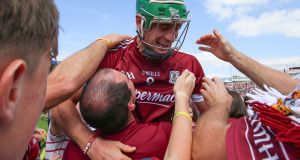 Overall, in the context of the brilliant hurling semi-finals last weekend, the standard in Thurles dropped off a bit. It was close and exciting in the finish, but there were a lot more mistakes in this replay than we saw last week. Galway won’t mind, although in my view they are going to need every minute of the next two weeks to recuperate and recover.

In the end Clare had every chance to get a minimum of a draw out of this but the fates were against them, and the very Semple Stadium woodwork that had saved them against Tipperary when Jake Morris hit the post and Ian Galvin scored a goal at the other end wasn’t as helpful and cost Aron Shanagher his goal opportunity in the 67th minute.

Like a boxer Galway survived because of the flurry of punches they had thrown in the early rounds and despite the punishment they were taking by the end of the bout.

Joe Canning played a key role in that survival despite concerns that when he was in the corner early on it was because he wasn’t 100 per cent. When the stakes were at their highest, however, he was the one who took the game by the scruff of the neck and showed vital leadership as the game looked as if it might spin out of their control.

Galway went 1-9 to 0-3 ahead in the 21st minute, and for the remainder of the game they scored only eight more points; of those Canning got five, including the line ball that marked a four-point turnaround after Shanagher’s missed goal.

Clare opted to deploy Colm Galvin as a sweeper again, but on this occasion Galway were ready and well able to work around him. They were very good in the opening period, going hard for the ball and scoring freely. They didn’t make the mistake of putting everything in on Jonathan Glynn and looking for knock-downs – which Galvin cut out in the drawn match. They were more varied.

As a result Galvin wasn’t making the same impact, and when he was switched from sweeper to a more orthodox role he didn’t really make any more of an impact. Other defenders were hitting hopeful ball in the direction of the outnumbered John Conlon and Shane O’Donnell, and Galway were comfortable.

I said in a preview that there would be an influential battle between Daithí Burke and Conlon, but while there was an obvious winner it didn’t have quite the expected influence. Burke had the better of his man, but to me Conlon looked hampered by injury of some sort. He struggled – taking on Burke is hard enough when fully fit – and had to wait until the end for his first and only score of the game.

David McInerney also had a good match at full back, but even so Glynn made an impact with his goal. His influence waned as the match went on, although he provided an invaluable assist for David Burke to score Galway’s last point.

Galway did well to survive, particularly without Gearóid McInerney, whose well-flagged injury kept him out. They managed in the circumstances because Joseph Cooney did well on Peter Duggan, the role that McInerney had in Croke Park until forced off by a calf injury.

Aside from all of the tactical considerations, Galway’s long spell without scoring after they had got the goal just into the second quarter didn’t come against them because Clare squandered so many chances. Their touch was terrible and puck-outs were under pressure – at one stage Tony Kelly spilling the ball out over the sideline.

Even after they had scored the goals Clare were wasteful. Duggan’s missed free towards the end was a glaring example. He tends to have a low trajectory but that strike was just mis-hit.It was reminiscent of the Munster final when he had difficulty with frees, and disappointing for him after being foot-perfect in Croke Park a week before. Yet that’s not to undervalue the great goal he scored.

When he did manage to get ball, Shane O’Donnell was on fire, as his goal demonstrated, but what surprised me about Clare’s attack was that Shanagher got so little time off the bench.

When they review the season Clare will be kicking themselves that they didn’t win either of these semi-final games but equally they had a good year. They impressed and after being written off having lost the Munster final, the extent of their recovery could be seen in the huge support they had back in Thurles.

The champions are still standing, but they really need to replenish their energies in the next fortnight as the challenge of Limerick will be greater than anything they have experienced in recent weeks.