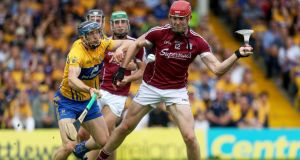 For once an endless summer found an afternoon didn’t extend beyond its remit. One last hopeful long ball from Tony Kelly dribbled out over the Galway endline and with that the All-Ireland champions were free.

While it would have come as neither hardship nor surprise to any of the 44,246 gathered in Semple Stadium if Clare had managed to squeeze out another extra-time, in the end Galway got home by a point and that felt about right.

Though they keep making it hard for themselves, they make it harder still for everyone they meet. Increasingly it’s only their occasional difficulty in expressing that superiority on the scoreboard – or, more accurately, their inability to prevent their opponents finding their voice in that regard – that makes games of these encounters.

For the third game in a row they watched a gaudy lead dwindle like sand through an egg-timer. They were nine points ahead with 22 minutes on the clock, just as they had been nine ahead with 16 gone in the drawn game. Crucially though, they managed to keep a velvet rope between them and Clare this time – the margin was whittled down to one on five occasions from the 53rd minute on but Galway got the next score each time. Whatever flaws they have, a shortage of nerve isn’t among them.

“Over the course of two games, including extra-time, we were only behind for three or four minutes in total,” said Joe Canning afterwards. “We didn’t get a lot of respect during the week, I thought, for the amount of character we showed. We were questioned, with people saying we didn’t perform and stuff like that. But only being behind once in an All-Ireland semi-final over two games just shows the character we have.”

We’ll pick a tiny nit here and point out that Clare were ahead twice in extra-time on Saturday a week ago, but it takes nothing from Canning’s point. Galway have had their collar felt far more regularly en route to the final than anyone could have imagined after they breezed through the Leinster round robin.

If they looked weary here at times it’s not without cause – the final against Limerick will be their ninth game of the summer. For Galway’s three All-Irelands in the 1980s they played eight games in total.

In the end they kept their wits about them to better effect down the stretch, the way champions tend to do.

Clare will have an ocean of regrets over their missed chances across the afternoon – they pucked 19 wides in total and only got a point each from Tony Kelly and John Conlon. Regardless of Galway’s generosity, that’s not going to get it done.

Even so, Clare were a bruised shoulder and the width of a post away from leading into injury-time. After Shane O’Donnell had pretty much singlehandedly hauled them through the second half, he put Aron Shanagher away in the 68th minute with only James Skehill to beat. The Galway goalkeeper advanced to smother Shanagher’s first effort and the Clare substitute could only scoop the rebound off the post with the goal gaping.

Seconds later Canning sliced a picture-perfect sideline cut through the posts at the other end to put Galway two clear. It was the afternoon’s biggest What-If and it went the champions’ way.

“Six weeks ago a post helped us out here in Thurles against Tipperary,” said Clare co-manager Donal Moloney afterwards. “There’s swings and roundabouts in a season. I always kind of knew that maybe that would come back at some point and unfortunately it did today.

“Who knows, even if that went in Galway are such a magnificent team that they might have still come with a point to bring it into extra time. You don’t know if that would have been the difference.”

No point wondering now. Galway are in the final, with Limerick sizing them up. They’ve had an answer for every question so far, even the ones they’ve had to guess at.

Canning was in princely form again here, thoroughly deserving of yet another piece of crystal for Man of the Match. He had a limp on him in the tunnel afterwards but nothing that will worry them ahead of the final.

One game left, then. Galway and Limerick. Let’s be having you, lads.

1 Born to ride, born to win: Sam Bennett, the making of a green machine
2 Next stop the Champs-Elysées in green for Sam Bennett
3 Keith Duggan: Surreal story of John Delaney needs to act as a wake-up call for FAI
4 Ulster’s European dream clinically crushed by Toulouse
5 Wolves to sign Nélson Semedo to replace Matt Doherty
Real news has value SUBSCRIBE