Nicky English: A very difficult game to call but Galway get a hesitant nod 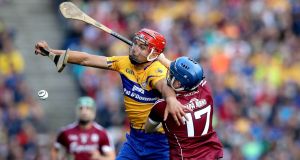 Nobody’s complaining that this championship has found an extra date in the hurling diary.

We can debate whether there shouldn’t have been extra-time in the All-Ireland semi-final, and my own view is that there shouldn’t, but in any case for those people watching hurling – and the numbers are increasing! – this replay between Galway and Clare is a welcome bonus and looks set to be another match to savour in a championship that just keeps on giving.

These two teams served up a treat in Croke Park last Saturday. It was a phenomenal game, probably even more physical and intense than the Limerick-Cork semi-final.

This time, the replay is in Semple Stadium and, I’ll be honest, it really is a conundrum to figure out who is going to win. Galway finished the drawn game in tatters in terms of injuries given the key personnel who had to leave on the field, while Clare – once they adopted the sweeper system with Colm Galvin – effectively won the game from that point on.

I’ve had my worries all year about Galway. What’s happened is typical of a team that wins the All-Ireland after a long wait. It is a huge achievement, and there’s an afterglow that comes with it but also a bit of fatigue. There was a lack of urgency in the league and we saw it again in the provincial campaign, particularly in the Leinster final, and that has to be a concern for them.

Could it work out that way again? Galway didn’t finish off Clare last Saturday, so could that inspire improvement in the replay?

I am doubtful of that because the last thing All-Ireland champions, with afterglow and bit of fatigue, need is a heavy match schedule. It’ll be tough to again achieve the heights they hit either in the replay against Kilkenny, where they had to achieve it twice, or against Clarke in the early stages last weekend.

Clare hadn’t been to Croke Park for five years and I’d forgotten how comfortable they can be in that environment. They loved being back. Once they settled down, there was a confidence and freedom to their play and I think they’d prefer to be going back to Croke Park rather than to Thurles. But it is what it is, and it even has a little favour of 1998 about it but this time with momentum more in favour of the Banner.

The key factor for Clare was how they played when they switched to the sweeper system. Galway were actually surprised by it on the day, they didn’t deal with it very well. However, it won’t be a surprise this time and Galway will have worked on dealing with and negating the influence of Galvin as a sweeper. They need more than just lashing the ball into Glynn.

Johnny Glynn is really important for Galway but, in a reference back to the afterglow and the bit of laziness from the previous year, Glynn gives them the chance to be even lazier because instead of working the ball smartly out the field, the option is there to lorry the ball into him. On most occasions the man is a magnet for it and he wins it.

Because Glynn was so good and successful against Kilkenny in the Leinster final replay, Galway have become a bit one-dimensional in their play. There’s a lot of ball going in. If it doesn’t stick to him he lacks support and that’s where Colm Galvin as the Clare sweeper cleaned up. Galway will need to find energy from somewhere. They played second-fiddle to Clare on that score in the drawn match.

Where does it sit going into the replay? We know they are closely matched. They drew over full-time, and over extra-time. So, what, or who, is going to be the winning of this game?

Clare definitely improved with Aron Shanagher coming back in. It was an unexpected bonus for them, a player who had suffered a knee cruciate injury only last November. He’s a very direct player, he gives them a potent full-forward line with himself and John Conlon. Do they start him this time? Is he capable?

From a Galway perspective, they’ve got to get back on their bike hard and get some energy from somewhere. If I was a Limerick supporter I’d nearly chose Galway over Clare in the final because you know Clare are going to come at you full of energy. And there are questions over the fitness of a number of key players in the Galway camp.

Will they have Joe Canning? Is Conor Whelan okay? Daithí Burke? Gearóid McInerney is probably out and he is a big loss. I could see Joseph Cooney moving from the forwards back into defence and a change of scenery wouldn’t do him any harm, he could be pretty effective in the half-back line.

I think it could come down to goal chances. Who creates them? Who takes them? If any of the teams can get goals, they’re likely to come through. I felt Galway spurned a few the last day. They haven’t scored many goals in the last two years – just two in five championship matches on the way to winning the title last year, and only two in their last four matches so far this year – but they did created and spurned plenty of chances the last day. I hate to even make the call on this one, it’s just impossible. But I still think, just about . . . . Galway, assuming their injury woes are not worse than we think!

1 The sweeper
When Clare adopted the sweeper system, they won it from there to the end. As noted above, on the day, Galway didn’t deal very well with it. They’ve become a little lazy: Johnny Glynn is so good at full-forward, he’s given them nearly too good an outlet and aids and abets the team’s laziness. Just lump the ball in and expect him to win it. If he doesn’t win it cleanly, though, it is a problem for them and Clare’s sweeper Colm Galvin swept up the ball time after time and used it well too.

Galway are going to have to deal with that a lot better in the replay if they are to win. They have to be precise in their delivery, work a way around the sweeper and get decent ball in to Cathal Mannion and Conor Whelan. They can’t just go the route one to Johnny Glynn. That’s not going to work. There’s a bit more thought required from the Galway perspective, more energy to move the ball and, maybe, to take on some longer shots.

2 The heavyweights
As a highlight, the battle between John Conlon and Daithí Burke the last day was as good as you will ever see. For anyone going to the game in Thurles, this will again be an area to keep a close eye on. They’re strong, physical players who each bring great energy in going to the ball. It was like watching two heavyweight boxers going to a standstill.

The key question is, did Burke – who defied an ankle injury to play – further damage that ankle? If Galway haven’t got Burke at full-back, then they haven’t anyone to deal with Conlon who has been outstanding all year. Galway need Burke to play, it’s as simple as that. If there is a clear winner in this individual battle, then he’ll likely be on the team that wins it.

3 The bench
It’s not a 15-man game, it’s about strength-in-depth and the impact players coming off the bench can be the winning of a game. Who has the better strength-in-depth? We weren’t expecting Aron Shanagher to be fit to play but he made a huge impact when he went on. His availability is like Clare pulling a rabbit out of the hat, he is one of the best young players in the country and a potential match winner.

David Fitzgerald too did really well when he went on. Maybe he starts this time, which mitigates the advantage of him coming off the bench. Galway are down in resources with so many players carrying injuries. Even if Joe Canning, Conor Whelan and Daithí Burke are passed fit, they’re unlikely to play 70 minutes. Clare look to have the better resources.