Nicky English: Clare did what they had to but they will need to improve 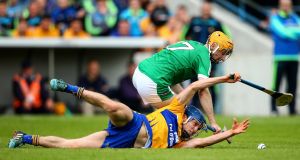 When Shane O’Donnell scored a point after his second goal and Clare led by seven, the excitement and freshness and energy of 2013 really looked like it was back and Clare were once again the force of old.

But by the time David Reidy had missed the last few frees and they were effectively labouring over the finish line, they reinforced old doubts for me.

It’s unusual for a championship match to conform so closely to what might have been expected of it but Clare did enough to get over the hurdle and they’ll be happy with that.

Semi-finals are there to be won and they’re in the Munster final with scope to improve and a healthy deck to deal from – Conor Ryan apart – which they haven’t had in recent years. But they have plenty to work on. It was a game that they won from an early stage but which they contrived to throw back into play against a Limerick team that just hadn’t enough to beat them but which got too close for comfort at the end.

To be fair they set up differently and played with more enthusiasm than had been the case in the past couple of years and they have that threat up front with Conor McGrath, who’ll definitely come on as a result of getting the game and Shane O’Donnell looking in pretty good form and the two Aarons (Shanagher and Cunningham) inter-changing.

They’re very dangerous if they can get ball into that full-forward line and they worked the ball well. Colm Galvin was excellent in midfield and used the ball well and they took their goals efficiently.

Limerick were isolated up front but still Kyle Hayes and David Dempsey were able to cause trouble up front and Cian Lynch during the team’s purple patch in the first half was doing damage at centre forward. During that spell and to a lesser extent all through the game, Clare found it hard to win primary possession even though when they did, they got it inside to good effect.

That difficulty in winning ball is an issue for them. They need to focus on that if they’re to go on to be contenders for the All-Ireland. A number of the puck-out failures could be attributed to Andrew Fahy in goal but it’s a more fundamental problem in the physical profile of the players they have in that area.

There are other areas where they can improve. For all the movement of Tony Kelly, Galvin, David Reidy and Podge Collins, who switch in and out and do create confusion for the opposition, Limerick still picked up a good bit of loose ball in that area.

Clare will need more from Kelly and you wonder how much the trip to the All-Ireland club final with Ballyea took out of him. We’ve seen that over the years and certainly Kelly didn’t look as refreshed as others on the team – O’Donnell and Galvin for example. Missing the penalty – technically correct but a bit harsh on Nickie Quaid – summed up his day.

Podge Collins also flitted in and out but wasn’t the dynamic influence on the match Clare would have hoped for.

Limerick can take something out of this. Their younger players were their most impressive. Seán Finn was excellent at corner back and made some vital interceptions.

In the forwards Kyle Hayes and David Dempsey showed that had a future and so did Barry Nash. Cian Lynch for them is a key player and when he was at his most involved they had that purple patch in the first half but he didn’t really get to half-time before he had slipped back.

They never really threatened. There were problems in the full-back line – Finn apart – and Richie McCarthy spent too much time out around the middle for my liking. I’m not sure who he was meant to be marking when the killer goal went in but the two Limerick full backs were outnumbered when Conor McGrath got in for the goal.

That can’t happen at this level or it will, as it did, result in a goal.

Limerick also had chances for points from Pat Ryan and Dan Morrissey but they showed their inexperience when easy scores were there. The team needs work. There was some aimless shooting, neither shots nor passes that drifted harmlessly wide – just as had happened against Galway in the league semi-final.

They have players to come back but they’re hardly All-Ireland contenders. The match was always more about Clare than Limerick. Are they now contenders? Now without considerable improvement.