Nicky English: Clare should be too strong for depleted Limerick 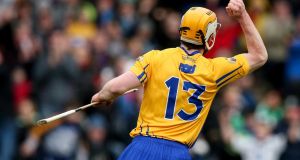 Clare and Limerick is one of those local derby matches where the favourites have a history of getting turned over and the advantage swings from one county to the other from year-to-year, often for no apparent reason.

Last year they played out a very poor-quality qualifier with neither looking like they wanted to be there and Limerick at times like they actually wanted to lose.

It was clear on the night that neither team was going anywhere. They have since appointed new management teams, both of whom have been successful at underage with the bulk of the group they’re now managing.

So you can be sure that there’s going to be more activity, fire and commitment this weekend.

Limerick are deprived of important players. Diarmaid Byrnes and Gearóid Hegarty were both in the half-back line that effectively won them the under-21 All-Ireland two years ago.

Hegarty has been playing more recently in the forwards and with success and is the most improved player in the team. During the league he was the go-to man and was a handful for all teams at centre forward.

He represents a huge loss, as does Byrnes. While he needs to get on to his right-hand side, he nonetheless shoots a lot, gets up from half back and is a powerful presence. His long-range frees are another weapon. Whatever little impact Limerick made last year in the qualifier was driven from right back by Diarmaid Byrnes in the second half.

They and Will O’Donoghue, who’s also injured, constitute a serious loss of physical strength in the middle third.

If we didn’t learn very much about the teams from the league, the most obvious consideration this week was that just as Limerick are losing important players, Clare are getting them back.

That reverses what has been a pattern: key players with injuries at key times. They haven’t been firing on all cylinders much since winning the All-Ireland in 2013.

Now, though, Conor McGrath is coming back, Pat O’Connor is coming back and David McInerney has got some game time under his belt. Podge Collins is back and playing well. They remain hard to read, though, and this is a really important game for them.

They should have ambitions of winning Munster given their 2013 form and under-age achievements. But we haven’t seen that form in the past four years – apart from the league last year and the impact of that petered out fairly quickly.

That failure to deliver on the promise of four years ago has meant they’re annually outside the established top four in championship. Sunday will tell a lot about how that has changed but it’s also a dangerous game if they’re not firing on all cylinders because, regardless of their absentees, Limerick will make it hot for Clare.

They will benefit from being outsiders, as it takes the pressure off – remember they were favourites going into the 2013 All-Ireland semi-final and it didn’t suit them. As a county they like Thurles and if they get even a suspicion that Clare aren’t on form they will exploit that vulnerability.

A key consideration here is that Limerick have scope to recover from losing this but Clare don’t. Limerick are under very little pressure. They have alibis in the injuries and their general profile as a younger team than Clare. But it is a must-win game for Clare, as it’s hard to see them recovering from failing against a weakened Limerick.

It’s dangerous. You can question what Cork were up to in the league quarter-final when Limerick won down there but the fact is that, the week before, Tipperary went down there and couldn’t win. Although it’s obscured by the semi-final against Galway, which was poor, Limerick’s league form wasn’t all bad.

Cian Lynch in my view has also stepped up. He was really good in the Fitzgibbon this year and seemed to have matured as a player in the league. He mightn’t have been tossing ‘no look’ passes over his shoulder but he was taking the scores he should and not trying all the time to bring others into play when he was in a shooting position himself.

There are still reservations about Clare. They need two substantial improvements. One, their energy levels have looked suspect and two, they’re not scoring enough. Maybe that has been down to the sweeper system they played but it’s an area that has to be more productive.

It’s a hard match to call. Last year they were both going nowhere but win this and things open up in a serious way for either team, in a Munster final and with Tipperary gone.

Are Limerick capable of winning the All-Ireland? I don’t think so. Clare arrive this weekend in Thurles under new management and presumably setting up without a sweeper – as they did when they actually won the All-Ireland – and if they’re contenders they will certainly have to beat a weakened opposition.

On the evidence of the past few years I remain to be convinced by them but they have enough to win this.