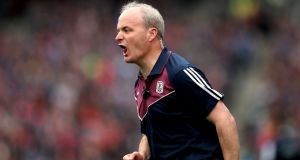 Galway senior hurling manager Micheál Donoghue has paid tribute to the coaching influence the late Tony Keady has had on his squad, and described the nationwide sorrow which followed the news of his death as “remarkable and a testament to the man”.

He had involved himself in coaching at all grades, and his effervescence meant that all generations of Galway people were familiar with him. His most recent coaching contribution was with Ahascragh, the home club of Padraic and Cathal Mannion. Keady was due to take a session with them on the day he was taken ill.

“He touched many lives,” Donoghue said. “The way he carried himself, and how he represented himself with Galway has shone through the last week. Our immediate thoughts will go to Margaret, Shannon, Anthony, Jake and Harry.

“ It puts a huge sense of perspective into it. The last week has been very humbling because of the outpouring of emotion in Oranmore, his own club Killimordaly and nationwide.

“From our perspective, our first thing is to extend condolences to the family, and I think the greatest thing we can now do is push on and try and wear that jersey in the honour that he did. That’s all we can do.”

As interest in the Galway-Waterford All-Ireland final begins to intensify, there had been echoes of what became known as “the Keady affair” hanging over the event.

In 1989, Keady was unable to play in that year’s championship after being hit with a ban for playing a game in New York. He was Hurler of the Year at the time. Ahead of Tuesday evening’s decision not to take any action against Austin Gleeson, there had been plenty of weekend debate as to whether the current Hurler of the Year, would be eligible to line out in the All-Ireland final.

At yesterday’s media day in a Loughrea hotel, before the news broke, Donoghue was reluctant to get into the specifics of the incident, but said it was preferable to see all first-choice players available for both sides on big days.

“When you are in this positon, and you are being asked the questions, you just see the process through and see what comes of it. But look, on the biggest day, whoever you are playing, you still want all the players – their big players and our big players – available. I’d love if Paul Killeen was available. He sustained a bad injury. So on all the big days you want your big players to play.”

And ironically, Galway’s Adrian Touhy was not cited for what looked to be accidental contact with the helmet of Tipperary’s Patrick Maher.

Harry Kehoe, the Wexford player with whom de Búrca tangled, later vouched for his opponent in the appeals process, and replays make it impossible to ascertain whether intent was there.

Both incidents have ignited debate over interpretation of the rule, and Gleeson’s incident, involving Cork’s Luke Meade just after the ball had gone out of play, was also open to several interpretations.

“The rule is there, and it’s just ironic in the last number of weeks that it has been one incident after another. Up to that it wasn’t a huge conversation-maker. But now, because you are at the business-end, it’s high on the agenda.

“But I don’t know what alteration they can or can’t make to it. Because it’s a high topic now it’s something they will look at to see how they can change it or what they can do, but right now it doesn’t concern you much.”

Team captain David Burke expressed his relief that Touhy is free to play in the final. “There was very little in it. It was more accidental than anything, I think. It would have been a shame for Adrian to miss it, like any other player.

Galway selector Noel Larkin also expressed the hope that Gleeson would not be denied a place in the final on what would be a technical infringement.

“Listen, absolutely. Austin Gleeson is the current Hurler of the Year, and the country wants to see him playing in the All-Ireland final. And hopefully that’s the case. We all go to see players like that. We saw him last year doing extraordinary things, and I think the final would be a better place if Austin makes it.”