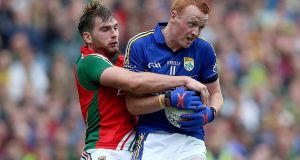 Despite being in-season since the last weekend of January 2016, Johnny Buckley comes into Sunday’s clash with Mayo short on match practice.

Buckley played league and championship with Kerry last year; then went into county, provincial, and All-Ireland club championship with Dr Crokes; and then back into the Kerry fold this spring. Which brings him to Sunday’s football semi-final against Mayo.

Despite his Dr Crokes clubmate Fionn Fitzgerald playing in the league final victory against Dublin – after their club All-Ireland success in March – Buckley opted to instead rest a lingering knee injury and ensure that he was 100 per cent for this year’s championship.

He returned to action for their Munster opener against Clare, nine weeks ago. Like in that Clare game, he came on as a substitute against Cork before excelling from the start in their All-Ireland quarter-final win over Galway.

So lots of training, less games, and very few of those in the green and gold.

“If you look at our lads this year [Dr Crokes], it’s been fairly full on. They got a chance during the summer to maybe take a week or two off, but that was about it. As players we are always looking to play matches and enjoy that side of it, but if it was a thing that those [club] competitions could finish within the year, it would be great.

“For our club season this year, you are playing 13 weeks in a row and you have that break over Christmas. Then you are playing two games in three months basically, so there’s no easy answer to it.”

Yet despite all that time in preparation for club and then county; Buckley, Fitzgerald and all his Kerry team-mates are going into the biggest game of their year having played only three intercounty championship games this summer.

Meanwhile their opponents Mayo have played seven, with two of them going to extra time and Buckley believes the extra miles on the clock might serve Stephen Rochford’s side well.

Games in succession, at the right time. He said: “As players and all the rest of it you would love more games each year and Mayo definitely have that this year in the route they’ve taken and there’s definitely advantages to it.

“You’ve games to analyse and areas to improve on and you can go out the next week and improve on it. I suppose their graph is definitely on the way up and they have that backing of match sharpness and fitness that I’m sure they’re going to bring.”

Lee Keegan has been leading the charge for Mayo again this summer, and given Buckley’s impressive showing (0-2) in the over Galway, the 27-year-old could well be picked up by the Westport defender.

“Look, he’s arguably the in-form player at the moment. I know he missed out the last day, but I’m sure he’ll be raring to go the next day. He’s a great athlete, he’s up and down the field and he has a great ability to get scores as well; as we saw in the first game. He’s a top class player and he’ll definitely need minding the next day.”

Sunday is a rerun of the fixture in 2014, when the Kingdom edged Mayo in a controversial semi-final replay in the Gaelic Grounds, Limerick – before going on to claim Sam Maguire.

“It was a very unique football match in that it was played in that stadium . . . we had played there before but the atmosphere was definitely something different to what you were used to.

“I suppose the game and the physicality of the game fed into that, and it was just one of those occasions where it was a rollercoaster and thinking that ‘we’re out, job done, that’s the end of the road’. We were pipped and then you were chasing back and Jonathan Lyne came on and kicked two monster points and it was just one of them days that was great to be involved in.”

A physical encounter indeed, with both teams clashing in a melee in the closing stages, so should we expect that bit of bitterness to carry through?

“I wouldn’t say so, it was two teams going at it and just two teams trying to get one over on the other and trying to pip it. I wouldn’t say it added any bitterness, it was just that bit of competition. It’s a natural thing when you are playing at high stakes.”

The stakes have risen this year for Buckley, with him captaining the Kingdom – although his club commitments delayed him from fulfilling that role until recently.

But has this made the role harder? “Not really. It would have been great to be involved at the end of the league but after that there is that lull. You have the county championship, you have the club championship, it’s not your training on a Tuesday, Thursday, weekend with Kerry. It’s slightly different.

“So when you came back into full-on championship training when the club scene was over, it was about fitting in that [captaincy], with getting back on the field at that stage. It wasn’t a huge thing and it wasn’t any extra pressure really.”

He may have missed out on lifting the league title, but Sam Maguire is certainly still within his reach.

While Kerry’s eight-point win last time out was a comfortable one, Galway still carved out four clear goal chances – suggesting there is still plenty to be worked on.

“It’s well documented, Galway having those goal-scoring chances. In fairness to Brian [Kelly] he made some great saves, but looking back on that it’s definitely something we need to tidy up on.

“There’s a load of aspects. There were periods in the game where we just didn’t score enough. We had the possession and just getting that transition up to the scorers and being able to capitalise in the periods when we were on top is definitely something we’re going to work on.

“We felt we were in a very good place going into the game, training had gone well. Just on the day it wasn’t a performance that we were happy with, we didn’t play with the intensity or put in the performance we were hoping to put in or had trained to put in.

“So looking back on it, it’s hard to pin-point exactly why, but just knowing the next day that performance won’t do against Mayo.”