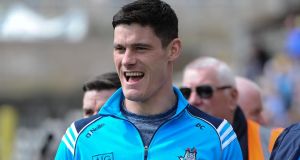 Jim Gavin has not revealed whether Diarmuid Connolly will feature against Tyrone. Photograph: Inpho

Dublin manager Jim Gavin has refused to speculate on the likelihood of All-Star forward Diarmuid Connolly returning to the All-Ireland holders’ team for Sunday week’s semi-final clash with Tyrone.

Connolly will be available for the meeting of the Leinster and Ulster champions after completing a 12-week suspension for interfering with umpire Ciarán Branagan during Dublin’s provincial quarter-final win over Carlow.

Gavin spoke openly on a broad range of issues at Tuesday morning’s Gibson Hotel press briefing though pointedly refused to go into any detail on the Connolly situation.

Asked if the St Vincent’s attacker was in contention to return to the first team, Gavin was curt with his reply.

“We just have to wait and see as we get closer to the game,” he said, kicking to touch again when asked what sort of shape the four-time All-Ireland winner is currently in. “He’s doing his own thing.”

Gavin was similarly non committal when asked to clarify if Connolly has been training with the team since the ban was imposed in June, a grey area under GAA rules.

“As I said, he is doing his own thing,” replied Gavin. “He is on his own programme.”

Gavin was critical of the Sunday Game’s handling of the Connolly saga when he spoke on the issue immediately after the back to back All-Ireland champions’ big win over Westmeath in Leinster.

He said this morning that he didn’t wish to jump back into that issue.

“I’m not going to get into that today,” he said. “My focus is purely on Tyrone and whatever happened in the past is gone for us now and the team’s focus is purely on a massive challenge against Tyrone in an All-Ireland semi-final.”

The final question for Gavin on Connolly related to whether or not a player could potentially start an All-Ireland semi-final having not played competitively in three months.

“We’ll just have to wait and see,” said Gavin.

He did clarify that he will be selecting from a full panel for the first time this year with Cormac Costello available again and Michael Darragh Macauley and Paul Flynn both competing in the quarter-final win over Monaghan.

“The first thing I’d say is that we don’t hand out jerseys (easily), both of those players earned the right to return to the field of play based on what we saw in front of our eyes in training,” said Gavin.

“So they’ve been training really well over the last number of weeks. They got those jerseys on merit. The biggest strength of this team is their sense of collective and they understand that they’re the sum of their parts and Paul and Michael Darragh came in and did their bit for the team.”