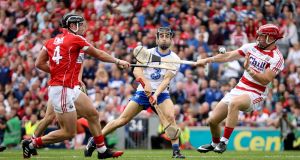 Let the culture wars begin. Waterford, the team that makes the hurling snobs puff themselves up to their full height on the pulpit, are in an All-Ireland final.

And they’re having a merry old time with it, thanks all the same. They rampaged into the decider here by plundering three goals in the closing quarter-hour, bringing clarity to a puzzle that had looked hopelessly knotted up until then.

In front of a monstrous semi- final crowd of 72,022, they ran stride for stride with Cork up until just short of the hour mark before sprinting clear at the sight of the line.

The contrast with this day last year against Kilkenny was stark. That afternoon, with the final so close they could breathe on it and see it fog up before them, they scored just 0-2 after the 58th minute. Here, they ran in 3-6 in the same period, including a 2-2 burst inside five minutes that drove the fight out of Cork’s bellies.

They cruised to the long whistle, albeit picking up some unwanted cargo along the way. Conor Gleeson, immense throughout, walked on a straight red near the end for a pull off the ball on Patrick Horgan.

Austin Gleeson, a peripheral figure until he turned the game with two moments of unique genius on the hour, is likely to find himself in the CCCC’s crosshairs for a first-half helmet grab on Luke Meade. The big sign around the corner from Ardkeen hospital screaming “Do it for Tadhg” is going to need an update over the coming weeks.

At the end, after he’d taken care of the pleasantries with the Cork management, Derek McGrath turned to the stands and looked for Tadhg De Búrca, missing here after exhausting the disciplinary processes all the way to the DRA late on Thursday night. McGrath had the number five in a circle on his hand, some of the Waterford players had it too.

“I promised him the other night coming out of the Louis Fitzgerald hotel that we’d be in final,” McGrath said afterwards.

“I don’t know if I’m putting it right, because we had a tough couple of weeks with him. He showed great mental fortitude in the two weeks. We did it for him, yeah. I make no apologies, that was part of the motivation for us.”

Which is all fine and well but the old truisms still stand. Motivation never scored a point and the other crowd go training twice a week too.

Cork were by no stretch of the imagination 11 points the lesser team here. Horgan put in mesmeric afternoon before being sent off alongside Conor Gleeson, apparently in a case of mistaken identity. He still finished as the game’s top scorer with 0-12, 0-5 from play. His summer ends with nothing to be ashamed of.

The same can be said of Cork in general. From unlikely beginnings they were a genuine adornment to the championship. Some of their younger starlets were hunted out of prominence here, with Brick Walsh’s schooling of Mark Coleman a devastating case in point.

But for all that they faded, they did have a two-point lead with 15 minutes to go against a Waterford team that was playing its fourth All-Ireland semi- final in three years. Nobody thought they’d be this good this quick. Without question, 2017 goes in the positive side of the ledger.

“From the outside, yeah,” agreed Kieran Kingston afterwards. “But we’re greedy, we’re ambitious, we want to do more than that. We’d a right chance of doing it, I’ll be honest. We were going in at half-time and we had mastered the breeze that was there.

“We were a point down, hadn’t hurled fantastically, weren’t allowed hurl fantastically, but still, the game was there to be won and then we kick on and we go two points up. So we’re ambitious, we’re greedy, we’re not in any way arrogant like that, we’re confident in the group we have and we felt that we could go and win today. It does reflect on the progress and the transition to a degree but, as I said, that doesn’t make the day any easier.”

Waterford walk on, then. With or without the two Gleesons, they will take their show to Croke Park again, by now hardened against the endless carping about systems and set- ups. It will come, of course, regardless of the fact that they’ve averaged 29 points a game in this championship, exactly the same as Galway. Or that they’ve scored a goal in every game this summer, unlike Galway who haven’t raised a green flag since May 28th. They will suck it all up and try to win a first All-Ireland in 58 years.

Even the hurling snobs surely won’t begrudge them if they manage to pull it off.

1 Ken Early: Handball ‘crisis’ a timely distraction from the grim bigger picture
2 The Offload: Springbok heavyweights heading for Pro14
3 Exeter coach Baxter calls for an end to mass Covid-19 testing in rugby
4 All in the Game: No sympathy from Bruno Fernandes
5 All Blacks facing a Christmas in quarantine
Real news has value SUBSCRIBE