Limerick’s ability to hit the accelerator too much for Tipp 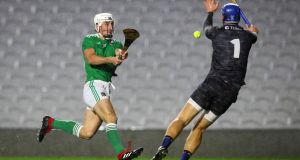 The winter championship bared its teeth in Pairc Uí Chaoimh with Cork doubling as Atlantis on Sunday evening. In horrendous conditions, Limerick led from the first minute on, in this Munster semi-final clash of champions between All-Ireland winners Tipperary and their Munster and league counterparts.

Down came the rain for the whole match, swirling around the empty stadium and drifting like cigarette smoke through the glow of the venue’s gleaming floodlights.

Even if John Kiely’s team didn’t visit another thrashing on Tipp, as they had done in last year’s provincial final, they were clearly and unambiguously the better team with a more varied scoring threat and greater impact off the bench.

Leading by nine at the break, Limerick absorbed their opponents’ scrambling efforts to get back into the match in the second half and won with their interval lead undented. The deficit would have been worse but for some good shot stopping by Brian Hogan.

Limerick manager John Kiely wasn’t inclined to see their quarter-final win over Clare as having given them any major advantage against opponents, who haven’t played competitively since the league.

“I don’t know. It’s hard to weigh it up. Maybe being through the routine of the day, I’m sure is a help because it’s different to your normal day, travelling in the car on your own.”

His counterpart Liam Sheedy was very disappointed with the team’s performance but equally, reluctant to ascribe it to going into the match cold even if his answer didn’t entirely convince.

“No, I think ultimately we came up well short today. I mean, we’ve had internal matches. We’ve had enough of trainings. Nothing really prepares you for the cut and thrust of championship so we would have liked to have had a game but no excuses, the fact that we didn’t have a match, I wouldn’t lay any of the blame to that. Ultimately we did not play to our potential.”

The fact was that Limerick looked a lot sharper and less inconvenienced by the conditions. Kiely shuffled his pack after the previous week, moving Cian Lynch to centre forward and dropping Kyle Hayes to wing back.

Their customary domination of the middle third wasn’t at all affected by the tweaked configuration and Lynch was one of the outstanding influences in the contest, his prodigious stick work unaffected by the deluge and capable of flicking and driving his way out from the tightest of corners.

The power of the middle triangle of Will O’Donoghue, and Tom Morrissey and Gearóid Hegarty on the wings was seen in the relentless harvesting of Tipp’s puck-outs and the brace of points all three scored before half-time.

There had been some focus on the team’s full-back line given the significant injury list there and a foreboding that Tipperary’s inside line would exact a higher price than Clare had managed but not enough ball got that far. There was one moment of ingenuity in the 20th minute when Séamus Callanan played in a inch-perfect pass to locate Jake Morris behind enemy lines and he finished well.

The problem was that one, Tipp hadn’t the platform to make this a constant threat and two, within seconds Aaron Gillane got in at the other end and toe-poked a goal into the net to nullify any negative impact on the scoreboard or on his team’s morale.

Even then, as Sheedy said in his post mortem, the outlook had felt promising after half an hour by which stage the margin was just four, 1-8 to 1-12, but he also acknowledged the constant danger of Limerick’s ability to hit the accelerator, which in the minutes before half-time, they did, scoring an unanswered five points.

When it’s going against you, it’s going against you. Among the scores was a point by Diarmaid Byrnes, who thrived in the physical exchanges, after he had dropped a long-range free short into Hogan’s hands. The Tipp ‘keeper on this occasion found one of his defenders but the ball was lost in the attempt to exit the defence and Byrnes was on hand gratefully to stick the ball back over the bar.

“They have a very, very strong half-back line,” said Sheedy, “especially in that first half when we were trying to get ball through there and we were struggling . . . so they hurt us in that sector. We couldn’t really get the ball away to our men and even when we did get it away we ended up getting turned over. We got it away a few times and then we gave it back to them and they pulverised us and put it over the bar.”

His team did rally after the break - during which the rain obligingly eased - with the first three points but Gillane’s penalty after Cathal Barrett had taken down Hegarty felt final even in the 48th minute, as the margin went to 10, 2-18 to 1-11. John McGrath got one back after much deliberation, caused by brother Noel’s possible fouling of the ball in the lead-up.

Tipp managed to halve that but as Sheedy lamented, Limerick tipped the pedal again and scored three points. A late goal by Séamus Flanagan brought the total for the winners’ bench to 1-3 and copper-fastened a place in the Munster final in a fortnight against Waterford.

For Sheedy it’s the now familiar task of rebuilding an All-Ireland challenge after a disappointing exit from Munster but he has done it twice previously.