Mayo breeze past Leitrim to set up a date with Roscommon 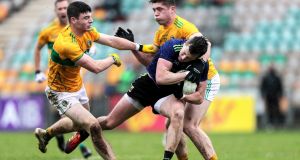 This result was never in doubt as the minnows of Leitrim came up against a Mayo side who harbour All-Ireland ambitions and so it proved as a strong performance in the final quarter eased the visitors to a comfortable victory at a wintry and windswept Carrick-on-Shannon on Sunday.

However, Mayo did not have it all their own way especially in the first half when Leitrim more than matched their illustrious opponents, opening their account from the throw-in with a point from play.

Three more points followed in quick succession from Evan Sweeney, Donal Flynn and Keith Beirne to put the hosts four ahead after 10 minutes. An opening point from Brian Walsh one minute later steadied the Mayo ship and, when defender Oisín McCaffrey was black carded, it opened up the Leitrim defence as Mayo enjoyed a purple patch scoring three points without reply to reduce the arrears. Beirne extended the Leitrim lead with a pointed free in the 20th minute but a Tommy Conroy goal two minutes later was followed by another period of Mayo dominance during which they scored four points without reply.

However Leitrim reduced the arrears with a Donal Casey point from play to leave the half-time score 1-6 to 0-6 in Mayo’s favour. Leitrim reduced the arrears with a Beirne pointed free immediately on the resumption which was cancelled by a free from Cillian O’Connor in the 41st minute. As both sides fought for dominance, another Beirne free in the 45th minute left just two points between the sides.

However that was as good as it got for Leitrim as Mayo, aided by a strong wind, started to edge away from a tiring Leitrim who had defended impressively from the outset. In a man of the match performance Cillian O’Connor orchestrated events up front, firstly scoring Mayo’s second goal in the 48th minute and adding to it with two more points from ‘45s to extend their lead.

The introduction of Diarmuid O’Connor and James Carr beefed up the Mayo attack and, with Oisín Mullen in defence in outstanding form foiling several Leitrim attacks as they fought to get back in the game, Mayo continued to tack on scores leading by seven points with 10 minutes remaining.

The final period belonged to Mayo as they rocked up a further five points to one from Leitrim who to their credit never gave up.

While Mayo manager James Horan bemoaned the very tough underfoot conditions he said he was well satisfied with their victory.

“We struggled against a Leitrim who were full of energy and played very well but we got through the game without injuries and introduced six debutantes and two from the bench all of whom played very well,” Horan said.

Leitrim Manager Terri Hyland praised his players’ performance. “Mayo are a good team but Leitrim are a good team too and, despite the final score, I thought for long stretches we were in the game but just didn’t translate chances into scores as Mayo did.”

5 The sports fan would like to wake up now, thanks very much