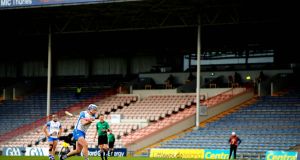 A first Munster SHC final since 2016 beckons for Waterford after they prevailed against Cork at Thurles on Saturday.

The Déise will clash with either Limerick or Tipperary in the decider as a three-point half-time advantage after playing with the wind was actually extended by one in the second half, with Cork unable to get back level at any stage after the 14th minute.

A goal from Waterford wing-back Calum Lyons three minutes after half-time was the crucial score, putting them into a 1-17 to 0-14 advantage, with further points from Jack Prendergast and Stephen Bennett giving an eight-point cushion.

While Cork did seek to respond in the immediate aftermath of that with points from Séamus Harnedy (two) and Christopher Joyce, they couldn’t come closer than four points until deep in injury time, when Patrick Horgan sent a free to the Waterford to leave it 1-27 to 1-24.

Unfortunately for the Rebels, there was no chance to find an equaliser and sub Patrick Curran added a Waterford point at the death to ensure victory for them.

Despite playing into the breeze, Cork began well and led by 0-4 to 0-2 after points in quick succession from Conor Lehane and Patrick Horgan but Waterford were level thanks to Stephen Bennett and Calum Lyons.

Horgan put Cork in front again but Waterford had four points in a row from there, from Shane McNulty, Kieran Bennett, Jamie Barron and Austin Gleeson to lead by 0-8 to 0-5 at the water-break and they would stay in front from there to the end.

While Stephen Bennett opened up a five-point lead after the restart, Cork did eat into the deficit somewhat as half-time approached, aided by slack Waterford shooting that led to a tally of 14 first-half wides. By the break, the Rebels were back within three points, 0-15 to 0-12, with Shane Kingston having scored three points.

The first four points of the second period were shared before wing-back Lyons made his vital contribution, ending a driving run up the right flank with a clever drop-shot past Anthony Nash for that six-point lead, which even then seemed to be too much for Cork to overhaul.

By the time of the water-break, it was 1-22 to 0-20, with Bennett’s accuracy from frees ensuring that Pauric Mahony’s absence wasn’t debilitating for Waterford. Every time Cork threatened to get back in touching distance, as when Kingston and Horgan sent over points, Waterford would respond, with Jamie Barron a constant presence in midfield.

As the game moved into injury time, Waterford led by 1-27 to 0-23, but a point from Cork sub Declan Dalton was followed by Horgan’s goal from a free just inside the D.

That was as close as Cork would get, however, and Waterford ensured they did enough for the win.

Another Richarlison goal wins it for Everton at West Brom 20:20
Woods tells police he did not know what caused car crash 19:57
Envoi Allen settling in well after move to Henry de Bromhead’s yard 19:11
Schumacher name gives me motivation every day, says Mick 16:46
Andy Farrell doesn’t know yet if he’ll be with Lions or Ireland this summer 15:46
Crossword Get access to over 6,000 interactive crosswords