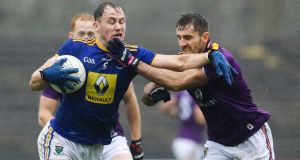 Wexford’s Brian Malone and Dean Healy of Wicklow battle for the ball during the Leinster SFC clash. Photo: Lorraine O’Sullivan/Inpho

Wicklow showed no hangover from their league promotion when they repeated their success of eight days previously to take a deserved four point victory over Wexford in this Leinster SFC opening round game at Wexford Park.

The poor weather of driving wind and rain led to slippery conditions, which would mitigate against a standard of football, but credit to both sides as they served up an enjoyable 70 minutes of football where a goal in each half edged the game in Wicklow’s favour.

While Wexford made five changes in personnel from the side which lost the league outing between the sides, Wicklow manager David Burke showed two changes. But it was the Garden County’s ability to stick to their game plan despite the dreadful conditions that proved crucial in the end.

“The buzz was still in the side following their league promotion. It added to their confidence and we just set about imposing ourselves on the game even into the elements in the first half.

“The players can take great credit from this victory. They gave it everything in what were dreadful conditions. Our league promotion and now championship victory is a great boost for the players. We now look forward to Meath next weekend,’ said Burke.

After an opening league victory over Limerick in his first game in charge, the season ended on a difficult note for Wexford interim manager, Shane Roche.

“We had our chances, particularly in the first half, but did not put them away. In the second half we were down to 13 players for five minutes, having had two black cards. This was a crucial stage.

“Looking back on the game Wicklow’s first half goal was against the run of play, while their second was rather fortuitous but we cannot make complaints, they have beaten us twice in eight days,’ added Roche.

Wexford opened the game brightly with two points inside the first two minutes through Eoghan Nolan and a Ben Brosnan free. Wicklow had to wait until the 11th minute for their opening score - a Seanie Furlong neat point from an acute angle but, with Brosnan picking off points from placed balls, Wexford led 0-6 to 0-2 after 26 minutes.

Still Wicklow were hanging in there despite playing into the elements, receiving a real boost three minutes before the break. An excellent build up out of defence saw midfielder Dean Healy win possession just inside the Wexford half and he drove through the centre of the defence before crashing a low shot to the bottom right hand corner of the net.

It was Wexford who finished the half with points from Alan Tobin and a Brosnan free to lead 0-8 to 1-3 at the interval, but it was Wicklow who must have felt more comfortable.

Within one minute of the restart, speedy Wexford defender Martin O’Connor got forward to kick a fine point, but it was a Healy-inspired Wicklow who gradually played their way into the game.

It may have been the ideal start to the second period for Wexford, but they were unable to build on this as the Wicklow midfield pairing of Dean Healy and Rory Finn assumed control, driving their side continually forward with excellent distribution in the conditions.

Points from Furlong and Healy, with a huge 50 metre effort, reduced the deficit to the minimum, 0-9 to 1-5, after 44 minutes.

Three minutes later Wexford were reduced to 14 when Eoghan Nolan was black carded for a head high tackle, while five minutes later he was followed on a black card by colleague Conor Carty who hand tripped Conor Byrne as he drove in on goal.

Furlong had a point in between the black cards to bring the sides level, 1-6 to 0-9, with the crucial score arriving after 55 minutes.

The ever dangerous Conor Byrne cut in on goal, saw his shot blocked by keeper Ivan Meigan, but the ball rebounded off the inrushing Byrne to finish in the net and now, with a 2-7 to 0-9 lead, it was Wicklow’s game to lose.

Wicklow sub Gearoid Murphy had a fine point, with Wexford responding through Alan Tobin and sub Daithií Waters but, just to show their dominance, Wicklow goalkeeper Mark Jackson pointed a 45 to secure victory.