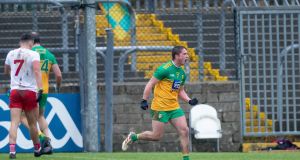 You want it darker?

It’s hard to know whether to file a match report here from Ballybofey or simply post a weather chart as drawn up by Sebastian Junger. This was as raw as it gets: the Ulster championship as imagined by the Rikers Island prison dramatics group. A 1.30pm throw in. The players changing in the stands. The rain rattling of the corrugated roof and a freezing wind drifting across the twin towns of Ballybofey and Stranorlar, where there wasn’t so much as a dog on the street to cheer on the athletes. But then, it was a day for mad dogs and Ulster men. The old rivals delivered a battle that was elemental and hugely compelling. Maybe it looked like a slog-fest on the television. You had to be here.

So many Donegal-Tyrone days have been about heat and dust that, in this upside down year, it made sense that they should duke it out in a storm. Donegal earned their spurs, handing Tyrone 1-3 in mistakes and twice battling back out of black holes of their own creating to edge home.

On a day when Patrick Bradley was unable to play with injury, when Michael Murphy struggled to play football on a mud rink and Ryan McHugh was either injured or hypothermic, Donegal needed to find new leaders. They did: Ciaran Thompson, Michael Langan, Eoghan Bán Gallagher and Peader Mogan led the charge of the next generation. But the seldom heralded Hugh McFadden emerged as the leader Donegal can call upon if they’re ever branch into air and sea rescue.

“We turned the ball over cheaply at times,” Declan Bonner said, drenched and delighted as he gathered his thoughts afterwards. It wasn’t long after 3pm and already getting darker.

“But conditions were terrible. It was a poor goal to give away - our own mistake. But I thought our response was terrific. That might have been the winning of the game.”

Tyrone left 14 shots at goal behind them and will head home knowing that this could have been a different result. In the first 15 minutes, they were singing in the rain. Or at least their bench, dispersed in the empty stand, was. They got off the mark sharply with a Niall Morgan free and then Darren McCurry made swift work of an errant Shaun Patton kickout to whip over another.

A Donegal handling error gifted them another free and the boon of an early three point lead: significant in a Biblical gale. They looked sharp and had the old Tyrone chutzpah while their hosts looked nervy and uncertain, overcooking passes and hitting a string of forgivable wides towards the river goal - known as the scoring posts on days less apocalyptic. That first period, with Tyrone up 0-5 to 0-1, had the makings of a classic Red Hand raid.

It took a direct burst and statement of intent by Neil McGee, the warrior’s warrior, to get the Donegal engine going. Michael Langan finished the move with a sweet point. In the 26th minute, Langan struck again, this time when Patton delivered a torpedo of a kick out through the gale and onto a plate for Peader Mogan, whose inside pass played Langan through on goal. The score was brilliant and seemed to convince Donegal that there was nothing hexed about the day.

After that, the day settled into a series of riveting personal battles and worsening weather fronts. There was something remarkable about the sight of McGee chasing Conor McKenna, the young sensation of the championship, around the no man’s land around midfield, at one stage setting himself up for a thumping, perfectly judged tackle to dislodge the ball from McKenna’s paw. Each of these small, mini wars felt decisive and momentum-shifting on a day when the slightest error - a slip, a stray pass - could have big repercussions. McGee had to retire just before half-time, hobbling to the stand. However, Mickey Harte wasn’t happy with the way McKenna was received by his Donegal guests in the first half.

“Aye well marshalled is a strange word to call it. Watching what was happening in the first half there I don’t think that was marshalling. I think it was man handling. And I don’t think he got the protection he deserved from the officials.”

A calamitous moment, then, in the 43rd minute for the generally excellent Bán Gallagher to give young Darragh Canavan a goal chance on his debut, which he coolly took and the visitors were back in front again, 1-7 to 1-5. It was then Donegal breathed deep and produced a nerveless run of four unanswered points, with Thompson landing two huge scores. Stephen McMenamin cleared a ball off the line to prevent Tyrone’s second goal but a huge point, thumped into the swirling wind by Oisín Gallen, finished the scoring and set the stage up for an insane seven minute period of injury time when Donegal held what they had and Tyrone desperately tried to concoct a late goal that would have changed everything.

“This is a knock out game and the odds were against us all the way,” said Harte, looking out at the grim, empty pitch.

“We almost pulled it off and that is something to be consoled about. But not much, when you know that that is championship 2020 over and another season gone.”