Longford squeeze through despite best efforts of Louth’s Sam Mulroy 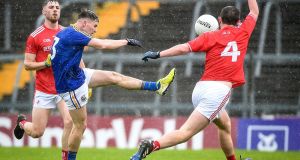 Longford edged Louth in a dour Leinster SFC first round affair by two points thanks to the impact of their 50th minute substitute Robbie Smyth.

With scores hard to come by, the Abbeylara man’s introduction was invaluable, as his brace of points late in the game swung the tie in Padraic Davis’ side’s favour.

In contrast, Louth’s over reliance on Sam Mulroy was apparent in every attack, the full forward scoring Louth’s complete total of 1-7 on the day and, despite a virtuoso performance, that lack of creativity elsewhere told down the stretch for the Wee County.

In the beginning, conditions were an overwhelming factor in both sides getting their championship bearings. Handling and misplaced passes were omnipresent as both teams struggled to get to the pitch of the game. Mulroy would kick the opening score of the game with a free but, in the next passage, Longford would have their best spell of the game.

Some direct running from Longford full-forward Liam Connerton got the midlanders underway with a point in the seventh minute. The impressive Darren Gallagher then opened up Louth’s packed defence with a neat handpassing move that involved Colm P Smyth and was laid off by his midfield partner Kevin Diffley for Gallagher to fire past Craig Lynch.

The game hinged on that early goal with Wayne Kierans’ side dominating possession but coughing up five first half wides. Eventually Louth got their just rewards when Mulroy squeezed a shot in at the near post. Yet Longford would still lead 1-5 to 1-4 at half time through an excellent long range effort from Daniel Mimnagh.

A lack of intensity seeped into tired legs upon the resumption as the scoring rate waned considerably. The nearest the net came to bulging occurred in the opening Louth attack of the half when Anthony Williams forced Paddy Collum into action. Mulroy would then add to his already impressive reputation with the resultant 45’.

Mulroy would then go on to kick Louth’s first point from play in the 52nd minute, an underwhelming lead point. Smyth then introduced himself into the game with a well manifested mark and once again Mulroy, determined not to lose, would level the game for the seventh time.

With that spark inside, Longford grew in confidence and direction, Gallagher added to his tally and Smyth clipped over another to insure they will be at home in Pearse Park next Sunday to take on Laois in the quarter-final.