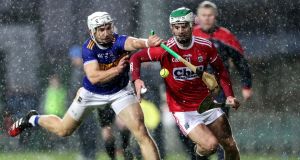 Cork’s Shane Kingston and Niall O’Meara of Tipperary in the All-Ireland SHC Round 2 qualifiers at LIT Gaelic Grounds in Limerick. Photograph: Laszlo Geczo/Inpho

While Tipperary manager Liam Sheedy knows there is a lot of room for improvement, he felt that his team displayed impressive character in seeing off Cork at the LIT Gaelic Grounds on Saturday evening.

Having played with a strong wind behind them in the first half, the All-Ireland champions only led by two points, 0-9 to 1-4, at half-time after shooting 12 wides. However, an early second-half goal from Jason Forde helped them into a five-point lead and, while the Rebels wiped that out, Jake Morris’s 68th-minute green flag proved to be crucial as it put them four ahead.

“I think the lads worked very hard all through,” he said, “and you have to do that against Cork. Some of the scores they got from distance in that second half, we were struggling to cope with them.

“They have great pace and in fairness they’re a really good side. Overall, into the breeze in that second half, I think questions were asked, but the one thing about this dressing room is I think there’s great character in it and that character and desire came out in the second half.

“We won’t be frightening anyone with that performance but, at the same time, today was about just getting a result and getting back into the All-Ireland series, and we’re just thrilled to be back in an All-Ireland quarter-final next weekend.”

While four Jason Forde frees and Breen’s first point had Tipp 0-5 to 0-1 ahead early on, Cork pulled one back with a Horgan free and then, just after the water-break, the same player capitalised on loose Tipp play around midfield before haring towards goal and unleashing a low shot beyond Brian Hogan to level.

Cork led twice in the wake of that but, even though Tipp were in front at the interval after finishing strongly through Forde (two) and Dan McCormack, the Rebels were in a strong position as the second half dawned.

However, while Shane Kingston pointed within a minute of the restart, Tipp retorted with two on the trot as Connors – introduced just before half-time – scored and then forced a turnover for Breen to get his third.

Though Cork had points from Harnedy – the first of five in a blistering second half for him – and a Horgan free, won by the industrious Declan Dalton, Tipp struck for a goal on 42 minutes. Jake Morris was the architect as he picked out Forde with a superb pass and he evaded the clutches of Colm Spillane before unleashing a shot past Anthony Nash.

When Connors set up captain Séamus Callanan for what would be his only point of the game, Tipp were five clear, 1-12 to 1-7, but Cork kept their composure. With Harnedy on fire, they ate into the lead and his third in a row, just after the water-break, left one in it with 16 minutes left.

While Connors set up Breen to push Tipp two in front, Cork still came and Horgan, Harnedy and Horgan again were on target to put them in front in the 59th minute. Unfortunately for them, they couldn’t hold off Tipp, and McCormack levelled before Paul Flynn took a pass from twin brother Alan to put the Premier back in front.

Horgan levelled for Cork, but it was to be the last time. Michael Breen scored his fifth point of the night to make it 1-17 to 1-16 and, while Cork worked a good move to create a scoring chance for an equaliser, they couldn’t convert. They were punished as Connors capped his fine display to set up Morris for the second goal, and Paul Flynn landed his second point to open up a five-point lead in injury time. Cork were unable to summon another response bar a Bill Cooper point at the death.

Their manager Kieran Kingston acknowledged that the Tipperary goals were tough blows from which to try to recover.

“I thought we were in a good place at half-time,” he said, “third quarter we didn’t push on as much as we could.

“I think we were maybe relying on the elements, which really eased off a lot in the second half. That’s not in any way taking from anything but we got caught with two sucker punches.

“First one, to lose that goal and come back, to go a point up, I think showed huge character, and then the second I just think was a bit late to get back from the second one. They were disappointing but I have to say hugely, hugely proud of the effort the lads put in the last two days. We’ve only been together a number of weeks and I think they showed today what they’re capable of.”