Kilkenny get the better of the rattle and hum with Wexford

Brian Cody: ‘The fact that we won today doesn’t give us any advantage for what’s to come’ 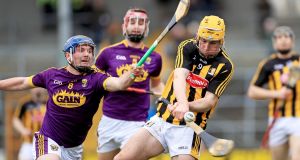 Rarely has a game with not much riding on it been played with more rattle and hum. Kilkenny did need the win to ensure their quarter-final place, but it was also about getting one back on Wexford. Or was it?

“None whatsoever,” said Brian Cody, when asked if there was any bearing in denying Wexford a four-game winning streak over Kilkenny, which according to reliable sources was last achieved back in 1955-56: some order regained nonetheless.

“Every day you go out is the game that matters,” added Cody. “The fact that we won today doesn’t give us any advantage for what’s to come, the same as it didn’t give Wexford any advantage coming here.”

The result does pair Kilkenny with Offaly next weekend, while Wexford will welcome league and All-Ireland champions Galway. Still, knowing both teams will be back in Nowlan Park in June for the round-robin of the Leinster championship was of more interest in the aftermath of this.

“There’s only one game here that matters for me this year,” said Davy Fitzgerald, losing to Kilkenny for the first time after a league, championship and Walsh Cup treble. “Kilkenny needed the result, and in fairness I thought they were just about the better team on the day. But we were flat out, that’s as good as we can go, so no excuses whatsoever.

“Today will be 100 miles away from what will be here in June. For me, the most important thing for me is that Wexford is competitive. No matter what happens, we have to stay there or thereabouts. And I think we will. We won’t be afraid coming down here – we’ll look forward to the challenge. To me, it’s actually too long to wait for. I’d rather it was coming quicker and we could tear into it.”

Not many in the 9,793 attendance would have disagreed: Kilkenny deserved the win, but Wexford left little doubt they’ll be back for seconds in June.

Both teams certainly tore into this game, Kilkenny laying down a couple of markers early on, and with that just about keeping Wexford at arm’s length until the end. It was still a one-score game going into the last five minutes, Darren Brennan’s point-blank save from Cathal Dunbar helping Kilkenny preserve their marginal advantage, but it wouldn’t have taken much for Wexford to level it.

TJ Reid was again majestic: give him an inch and he’ll take a score, and he finished with 0-12; Richie Leahy and James Maher were swinging their athleticism around midfield and hit five between them, while Walter Walsh and Ger Aylward added to five answered points shortly before half-time to briefly push their lead out to seven, 0-12 to 0-5.

Wexford tore back from that in the second half, Paudie Foley’s brilliant long-range free-taking and an awakening of Rory O’Connor showing them the way. The teenage O’Connor had been pushed around a little in the first half, only to finish with 0-6, including two late points when Wexford needed them most.

Lee Chin’s absence through injury was certainly notable as Wexford hunted for goals, and a little more accuracy from Wexford might also rattled Kilkenny a little more. Instead they had the legs and nerve to carry them home, Pádraig Walsh and Cillian Buckley typically steadfast in defence.

“It was really hectic stuff right up to the end,” added Cody. “We certainly couldn’t relax and think ‘we have it’ . . . Even the last ball that went in there, Darren [Brennan] was well tested to make sure he held on to it. And they didn’t seem to be saying ‘it doesn’t matter’. Of course it mattered. Every day you go out matters. We just had to make sure we won the game.”

Last word from Fitzgerald was on the meeting with Galway: “That’s why I think we deserved two frees at the end, one more point, we’d have a different pairing. No, I’m delighted we’re playing them! I think they’re starting to pick up. I think they are starting to come back. I wish we met them a few weeks ago when they weren’t as good.”