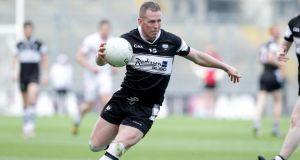 Substitute Adrian Marren’s pointed free in the fifth minute of added time earned Sligo a useful draw in a topsy-turvy encounter with Longford at Markievicz Park.

Both sides had chances to snatch a win after Marren’s equaliser, with Longford finishing with 14 players due to Barry Gilleran’s late dismissal.

Longford’s purposeful start against Sligo’s packed defence saw them establish a 0-5 to 0-1 lead by the 18th minute, a spell that included a brace of points from top scorer Robbie Smyth.

But Sligo, for whom Adrian McIntyre impressed, responded with eight unanswered scores to go four points up, 0-9 to 0-5, by the interval. It got even better for the home side after the restart and two more scores increased their lead to six.

Longford goals from substitute Pauric Gill and Darren Gallagher helped put the visitors back in front, 2-7 to 0-12, with 50 minutes played. From then on it became a tit-for-tat contest.