Antrim show some spark as they see off lacklustre Offaly

Ulster side receive boost ahead of relegation playoff 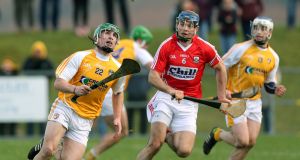 Antrim recorded a shock but fully deserved win over Offaly in Birr on Sunday. While Offaly were already in the quarter-finals and Antrim destined for a relegation playoff, the northerners were far hungrier on the day and would not have been flattered by a bigger win.

They had to rally late to do so as two Shane Dooley frees had put Offaly on level terms with time almost up and they looked to have done enough to have secured a draw. However, a free from man of the match Neil McManus and an injury-time goal from Nigel Elliott gave them the result.

For Offaly, the result doesn’t matter too much but they will be very disappointed at their performance as they never really matched Antrim’s desire. They gave some fringe players a chance on the day but Antrim played most of the hurling.

The visitors were the better side in the first half when playing into the wind. Daniel McCloskey’s 10th-minute goal gave them a 1-2 to 0-1 lead. Peter Geraghty’s excellent goal two minutes later helped Offaly to level it up at 1-3 each but Antrim should have been further ahead than 1-10 to 1-9 at half time.

In the second half, Antrim held a three-point lead for much of the way before Shane Dooley’s 52nd-minute goal levelled it up at 2-13 to 1-16. In the closing quarter, it was Antrim who got the crucial scores to get the job done.