Burke and Hayes shoot Dublin to safety against Laois 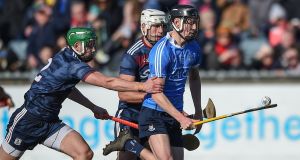 Donal Burke hit 11 points and Ronan Hayes notched 2-4 as the Dublin hurlers proved far too strong for Laois in O’Moore Park to book a league quarter-final place and save themselves from relegation.

A first-round loss to Offaly put Dublin on the back foot and an unconvincing win over Antrim and defeats to Limerick and Galway meant they needed to beat Laois to avoid being dragged into a scrap for safety.

But with Burke and Hayes in top form throughout they never looked in any real danger.

They were five points up after six minutes and a Ryan O’Dwyer goal in the 20th minute put them 1-9 to 0-2 clear.

Laois rallied briefly with nice points from Neil Foyle, Cha Dwyer and Enda Rowland, but Dublin finished out the half well and led 1-15 to 0-6 at the break.

While Laois battled hard in the second half and PJ Scully hit a string of nice points, Dublin never looked in any danger and two late goals from Hayes helped them to a 15-point win.

Laois now must go to Antrim for the relegation playoff with the loser making the drop to Division 2A for 2018.