Galway see off 14-man Monaghan to reach Division One final 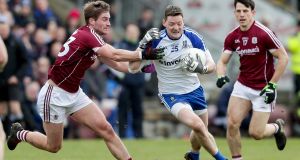 A fifth win in a row means Galway are into the Allianz Division One league final, but 14-man Monaghan might wonder what could have been after they fell away in the second-half at Pearse Stadium.

Monaghan were two points ahead after impressing when playing into the wind during the first-half, but captain for the day, Fintan Kelly, was sent off just before half-time, and Galway opened the second period with six unanswered points to take control.

Before the Monaghan forward was sent off, his side had put in a brilliant 10-minute spell, where they kicked four points without reply, and Galway manager Kevin Walsh said his side’s response to that period was crucial.

“Before half time there was 15 minutes where it was just flat, too flat for our liking,” said Walsh.

“We got them back into the dressing room and had a few words and definitely the intensity levels lifted up higher.

“I’d be much happier with the second-half, with the application levels and intensity, apart from a few instances in the last 20 minutes.”

The loss of Patrick Sweeney after just nine minutes was a big blow to Galway, but as it turned out his replacement Sean Armstrong went on to deliver a man of the match performance as Galway’s play-maker. When he arrived into the action Galway were 0-2 to 0-1 ahead after Paul Conroy and Barry McHugh found the target, although Jack McCarron’s free soon levelled matters for Monaghan.

Three of the next four points went to the home side as the seemed to make the most of their direct running and support on the shoulder in the face of Monaghan’s defensive wall, but a couple of points from Conor McManus and another from McCarron gave Monaghan a 0-7 to 0-5 interval lead.

The sending off was crucial though, and shorn of that extra body in defence, Monaghan began to struggle with Galway’s strong ball carriers. It seemed as if Kelly could have avoided kicking out after he was fouled by Gary O’Donnell, and as well as losing their player, Monaghan also missed long a tap-over free, which would have put them well in control. Their manager O’Rourke noted it’s significance.

“I don’t know, I might see it later on but we thought he (Kelly) was wrestling himself free,” said O’Rourke.

“It was the changing of the game. We have to learn from it. But very disappointed with it. We were going well at that stage. We were well in the game. But as the game went on the boys started to tire.”

Comer started the half with a great point and Shane Walsh did similar, while a couple of McHugh frees and Brannigan and Adrian Varley scores pushed Galway well ahead.

All throughout the competition the Galway defence has been their strength and again they kept some of the country’s top forward quiet. For the most past Eoghan Kerin was handed the job of marking McManus and he had a tough day on the Annaghdown man, with McManus’s only second-half point coming from a free in the 52nd minute - Monaghan’s first of the half.

That score put three points between the sides, but Galway went on to hit three more without reply and five of the next six scores to be certain of the win.

At the death a long ball unlocked the Galway back line though and Kieran Hughes rattled a goal for Monaghan, which was the first conceded by Galway in their five games, and even though Owen Duffy also came close late on to a second goal, Galway were never in trouble.