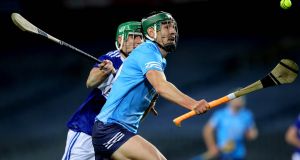 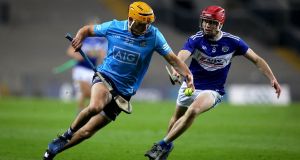 It all started on Saturday evening. The weirdness of an empty Croke Park, even allowing that the GAA will know bigger box-office days that this first round of the Leinster hurling championship, was counterpointed by a pitch so perfect it almost gleamed in the autumn sunshine.

On the field Dublin laid to rest the visceral disappointment of last year’s ambush by Laois with a 14-point win that was in some ways reflective of their superiority but which owed its magnitude to a run of late scores, leading to a very decent total.

Chief in the matter of procurement was Donal Burke, whose 1-16 included 1-3 from play, including the 24th-minute goal that for the first time put a stretch of water between the teams. It summed up his decisiveness and precision playing in a withdrawn role.

Picking up loose ball around the 65-metre line, he cut a direct path through the Laois defence and finished deftly to the net. His dead ball accuracy was virtually flawless – just one out of 14 not converted – and he provided a wizard’s assist for Mark Schutte to shoot Dublin’s 30th point.

Getting the season even to this point has been an almost epic struggle and that was reflected in the effort of the teams.

Dublin manager Mattie Kenny could be relieved that the fixture this time held no unpleasant surprises and encouraged by Burke’s virtuosity and a good spread of scoring – 10 players – but it had all been a journey into the unknown.

“The challenge for a lot of the teams is on your first day out, not knowing fully what to expect. We had a couple of challenge games organised that fell through because when Dublin went into Level 3 the games we were going to play didn’t go ahead.

“So it was our competitive in-house games we were relying on so we were always a little bit apprehensive with what we were benchmarking that against to say whether you were going well or not going well.”

His counterpart Eddie Brennan spoke about the impact of coronavirus on preparations for all teams.

“We lost two lads during the week because they were close contacts of confirmed cases. It’s there, it’s real, it’s just part and parcel of it . . . Fair play to both sets of players and everyone for making it happen, for coming out in those circumstances. You just have to look at the situation there in Offaly this week, you just don’t know what’s going to happen.”

Both teams played a sweeper and deployed skeleton staff up front, leading to an amorphous middle third where Dublin’s physical presence made itself felt and further helped by Laois conceding puck-outs, they pulled in nearly 80 per cent of the restarts.

For all the possession, the attack laboured at times and at others the rustiness showed with turnovers and technical fouls but once Burke’s goal went in Dublin had a grip on the match, leading 1-16 to 0-12 at the break – Laois being nearly as indebted to their frequently solitary forward Ross King for his accuracy from free as their opponents were to Burke.

It must have been accordingly a disappointment that they lost the initiative in the third quarter after a strong initial resumption added four unanswered points to the lead.

Brennan brought on some of last year’s high performers including All Star nominee Jack Kelly and top scorer Mark Kavanagh – whose presence he described as “a miracle” – and allocated the sweeper’s role to Paddy Purcell. Laois’s running from defence caused trouble and supplemented by a couple of boomers from goalkeeper Enda Rowland, they were back within six points.

Dublin’s fourth quarter restored the imbalance, outscoring their opponents 1-8 to 0-3 – the goal coming from a typical swoop by Eamon Dillon and a lightning finish in injury time.

Brennan regretted the impact of the second goal on the overall picture but must now get ready for a qualifier match against one of the Munster counties in a fortnight.

Kenny has the more immediate task of taking on Kilkenny next Saturday. He mused on his team’s big score in the cavernous stadium.

“I know there’s been some reference to the Premiership in England. Playing in an empty Croke Park the emotion of the crowd isn’t there. The game seemed very open, I thought. There were a lot of scores from both sides. Laois ran up a very good score as well.

“Is this going to be a sign of things to come in the championship without the crowds and the emotion the crowd gives? It’s more an open game of hurling, more free scoring. So it will be interesting to see does that pattern develop or maintain as we go along in the championship.”