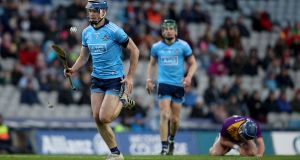 LEINSTER SHC QUARTER-FINAL
Dublin v Laois, Croke Park, 6.0 – Live on Sky Sports Mix
Referee: Paud O’Dwyer (Carlow)
Fadó, fadó – during the league, in other words – Dublin looked to be heading into yet another championship in yet another muddle as to how they were going to tackle it. Chris Crummey had been their big revelation in the spring, his move to the half-forward line counting as the one significant piece of evolution. But then he did his collarbone and then the planet shut down.

Eight months later, it will be interesting to see if Mattie Kenny continues with Crummey in the forwards, although Seán Moran’s club championship campaign as an attacker for Cuala would suggest he might not be out of place up there too. Either way, Dublin’s long-standing problems are encapsulated – their best players are in defence. They haven’t had an All Star nomination in attack since 2015.

Laois had their number last year and even though the shock factor is gone, they have no reason to fear a trip to the capital. Cha Dwyer hasn’t returned and free-taker Mark Kavanagh is injured. Eddie Brennan’s side knows this is their big shot though – the back door will surely chew them up. Dublin ought to have enough but we said that last year too. Verdict: Dublin

ALLIANZ FOOTBALL LEAGUE
Throw-ins at 2.0 and matches on GAAGo unless stated

DIVISION ONE
Kerry v Donegal, Austin Stack Park, Tralee – Live on Eir Sport 1
This actually has the trappings of a league final in that Donegal could actually also win the title were Dublin and Galway to draw. Both teams gave good accounts of themselves last week. Kerry’s structured defence against Monaghan was complemented by clever running in transition from the back and David Clifford on hand. Donegal absorbed Tyrone’s challenge and looked sharper and more menacing when the hand passing subsided. That match is next week’s Ulster quarter-final, which may affect Declan Bonner’s selection policy. Verdict: Kerry

DIVISION TWO
Kildare v Westmeath, Newbridge
In US election terms, there is a narrow path to promotion on offer here – whoever wins can go up with help from elsewhere. Kildare were decent in holding Cavan at bay last week and Jimmy Hyland looks like he could be in for a prosperous winter. But Westmeath were humming against Laois and with a fuller arsenal available, they will fancy a successful raid. Verdict: Westmeath

Cavan v Roscommon, Breffni Park – Live on TG4
Cavan can go up or go down today but you suspect they’d settle for still being in Division Two come nightfall. With the first round of Ulster awaiting them next Saturday, it’s hard to fancy they’ll be pulling out every stop. Expect the Rossies to take advantage and confirm passage to Division One as champions. Verdict: Roscommon

Clare v Armagh, Cusack Park, Ennis
If Armagh contrive not to get promoted, they’ll have wasted a really promising first five-sevenths of the league. They were better than Roscommon for long stretches last week too and have played like a Division One team in flashes over the past two seasons. But Clare will be scrapping to stay in Division Two and are nobody’s easy mark. Verdict: Clare

Fermanagh v Laois , Enniskillen
Laois started this league well but their display against Westmeath last weekend was relegation form. If they don’t win here, they full deserve to fall through the trapdoor. Fermanagh put in a noble shift against Clare, all things considered. But with a fortnight to get ready for Down, they’ll hardly be busting a gut here. Verdict: Laois

DIVISION THREE
Offaly v Derry, Bórd na Móna O’Connor Park
Offaly will be naggingly aware that they may conceivably need something out of this. Derry didn’t look in obliging humour last week but now have nothing to play for, which may tilt it towards John Maughan’s team. Verdict: Offaly

DIVISION FOUR
Wexford v Wicklow, Wexford Park
Who spiked the Wicklow coffee last week? Running up a 7-11 total against Antrim came from the clear blue sky and sets this up as a league decider. Wexford knocked Limerick off their perch last week but notice has well and truly been served. Verdict: Wicklow

Antrim v Waterford, Dundalk
There’ll be a bit of spite involved here, after Waterford’s reluctance to cross the border for the game got hackles up in the Antrim camp. The northern side took a bad beating last week in Wicklow but should make amends. Verdict: Antrim

Sligo v Limerick, Markiewicz Park
Limerick need to be careful not to do a Devon Loch, having made such a promising start to the league. A draw would most likely do them here but Sligo are pretty free-scoring and only just lost a thriller in Carlow last week. Verdict: Sligo

MUNSTER SHC QUARTER- FINAL & ALLIANZ HL DIVISION 1 FINAL
Clare v Limerick, Thurles, 3.45 – Live on RTÉ Two
Referee: Fergal Horgan (Tipperary)
From an encouraging spring when they earned place in what’s doubling up as the league final, Clare have had a series of misfortunes and lost some experienced players but of the spring team, only John Conlon, albeit an enormous loss, is missing.

Limerick have had their own travails with Mike Casey following Richie English into dry dock, leaving the full-back with a patched-up look. Dan Morrissey is likely to go to full back where he played a couple of times in the 2016 championship and Aaron Costello who impressed during the league the probable replacement for English. They will be under pressure if Shane O’Donnell gets on enough ball.

Centrefield looks the most box-office contest bringing together Tony Kelly and Cian Lynch but Limerick’s attack can exert serious pressure on their opponents.

This is such a disorientating fixture, as the counties haven’t hurled for nearly eight months. Clare are distant outsiders but with Brian Lohan in charge, they should have work rate and application even if they do appear a bit out-gunned. In another disappointment for John Kiely, in form Na Piarsaigh forward David Dempsey is out for the season with a groin injury.

Limerick are actually the holders of the league and can go back-to- back for the first time in 35 years when coincidentally Clare were also the opponents. Verdict: Limerick

ALLIANZ FOOTBALL LEAGUE
Throw ins at 2.0 and matches on GAAGo unless stated

DIVISION ONE
Galway v Dublin, Pearse Stadium – Live on TG4
Dublin weren’t particularly sparkling last week but they didn’t implode like Galway in Tuam. Pádraic Joyce’s men are unlikely to be overwhelmed this time both because the manager will expect a reaction and as Dublin won’t be reaching for the paddle in quite the same way as Mayo. Galway still aren’t at full strength and Dublin need to improve on the sloppiness – conceding turnovers, particularly. If Kerry win today this is a dead rubber. Verdict: Dublin

Mayo v Tyrone, Elvery’s MacHale Park – Deferred, TG4
Mayo can banish the whole relegation spectre by winning this and they are heavily favoured to do so. Tyrone looked ponderous against Donegal apart from the interesting arrival of Conor McKenna as some sort of deliverance, ironically given Mickey Harte’s known views on AFL. Mayo were also startlingly dynamic in Tuam although today will tell how much Galway’s malaise influenced that, as the visitors are now themselves threatened by the drop. Verdict: Mayo

Monaghan v Meath, Clones – Deferred, TG4
Meath put it up to Dublin last week and their young corner forwards Thomas O’Reilly and Shane Walsh were particularly productive but this may be a more fraught occasion, as Monaghan need the points to ensure that they’re not playing Meath next year as well. Séamus McEnaney’s team competed with Kerry but scoring remains sluggish and still dependent on Conor McManus. Verdict: Monaghan

DIVISION THREE
Louth v Down, Dowdallshill
About the only thing going for Louth is that the visitors have already been promoted. A year ago Down lost this fixture and promotion but the home side were a feistier collective at that stage. Verdict: Down

Leitrim v Tipperary, Páirc Seán MacDiarmuida
Leitrim need to win this by about six points to make sure of survival, which would have been a target at the start of the year (remember that) but Tipp were competent winners over Offaly and the home side notoriously had no match. Verdict: Tipperary