Brian Hurley: ‘It’s been torture, I just want to be kicking a ball’ 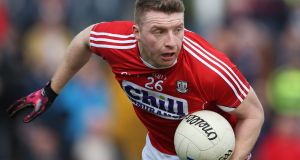 Cork’s Brian Hurley: “I’d love to play against Meath but that’s down to management and hopefully I’ll be going well enough for it.” Photograph: Inpho

Brian Hurley doesn’t sugar-coat his response, looking back on the serious injury that terminated his season last summer, as Cork footballers were getting ready for the All-Ireland qualifiers after a shock defeat by Tipperary.

“It’s been torture. If you’re a young fella from Castlehaven who just loves kicking ball, you want to play every week but it was a serious injury and you’ve to treat it seriously. In fairness to the medical team they’re taking extra precautions by holding me back a small bit.”

The injury was a hamstring torn so badly he could hear it rip. It compounded a bad 12 months in football for the talented full forward, as Cork were relegated from Division One and thrashed the previous year by Kildare in the qualifiers.

The county has become subject to the tribunals of public opinion in recent years with Kerry being more successful in Munster than at any time since the Mick O’Dwyer era and only last weekend Cork were well beaten by Clare in Division Two.

For Hurley, his football career held more immediate challenges than how the county was faring in his absence.

“You’ve enough on your plate over the past seven or eight months, pushing yourself and there’s a lot of negativity there and you ask yourself questions. I just try to keep positive for myself; I can’t control anyone else on the team or management so it’s just about being positive myself and trying to get out there myself and try to get into good form.

“We went down on scoring difference last year and two or three teams could have gone down. At the end of the day everyone is judged on championship. Look we’re going to keep our heads down and be as positive as possible and try to get as many wins in Division Two and get up the table and push on for the summer season.

“If knock-out season was in the league it would be a different story but we just keep our heads down and hopefully there’ll be a big year ahead.”

It’s been a fractured career so far for Hurley who will be 25 next month. Some of his best displays have come in the hardest matches, for instance the All-Ireland quarter-finals against Dublin and Mayo in 2013 and ‘14, (0-3 and 1-3 from play, respectively) with his bustling style and accuracy.

At present he feels he can be in contention for the county’s next league match against Meath as he intends to play for Castlehaven this weekend.

“Look, it’s not my call. I can do everything in my power to put myself in that position. Hopefully the weekend will go well and I’ll get a few scores and play well through the game without any reactions (to the injury). I’d love to play against Meath but that’s down to management and hopefully I’ll be going well enough for it.”

The match has taken on a critical value for both counties who are now in the bottom half of the table.

“It’s that kind of a league,” he says. “It’s all about on the day performance. As I said, our next game is Meath - we have to win.” Brian Hurley was speaking in Croke Park after the launch of an initiative between the RNLI and the GAA to prevent death by drowning and recounted how he had been involved in the search for survivors after the sinking of the fishing vessel Tit Bonhomme off the Cork coast in January 2012.

Hurley is one of a number of Gaelic athletes who are helping to promote the RNLI’s Respect the Water campaign, along with retired Kilkenny multiple All-Ireland winner Jackie Tyrell, Antrim’s Neil McManus, Lee Chin from Wexford, Kerry’s Killian Young and led by Dublin All-Ireland winner Lyndsey Davey, who spoke about her great uncle, Michael Hayes, skipper of the Tit Bonhomme and one of five men who drowned in the disaster.