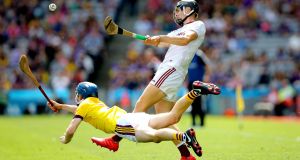 Making history is rarely easy and while Galway are now within touching distance of an Electric Ireland All-Ireland MHC three-in-a-row, a couple of fresh hurdles have been thrown in front of them.

They will be without, as things stand, captain and centre-back Ian McGlynn for their August 18th final showdown with Kilkenny after his straight red card dismissal.

Galway led by nine points when McGlynn was dismissed in the 38th minute following an off the ball incident which also resulted in Wexford’s Luke Kavanagh being booked.

To the title holders’ credit, they retained that nine point advantage at full-time and never truly looked troubled.

There was further drama in stoppage time when Galway full-forward Shane Morgan suffered a suspected concussion during a melee which resulted in two Wexford players - Kyle Scallan and Cian Molloy - being sent off and a third player - Galway’s Eanna Davoren - being booked.

It’s understood that Morgan was taken by ambulance to hospital for attention though manager Brian Hanley said he’s optimistic that both the Loughrea attacker and McGlynn will be available for the final.

Hanley said that in McGlynn’s case, an appeal of his red card is almost certain.

“If I know Shane Morgan, he’ll be fine,” said Hanley. “He’s great stock and he’ll be alright. With Ian, we’ll appeal it because it’s very harmless from what I’ve heard.”

They trailed 0-10 to 0-3 at half-time and were buried beneath an avalanche of Sean McDonagh scores, the Galway centre-forward finishing with 0-12 (0-9 from frees) and earning the man of the match award.