Archer finds his range as Dublin prove too strong for Galway 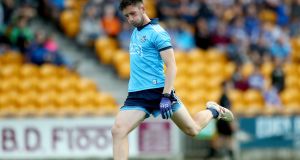 Ciarán Archer scored 2-6 as Dublin claimed a place in the All-Ireland Under-20 Final with victory over Galway. Photograph: James Crombie/Inpho

Leinster champions Dublin reached the All-Ireland Under-20 football final as Ciarán Archer scored 2-6 in their victory over Galway at Pearse Park in Longford.

Galway had more possession and chances in front of goal in the first half but went in trailing 2-6 to 1-4 at half-time. They had already registered six wides and although Brian Harlowe found the net, Galway were five points in arrears. Archer was the star for Dublin and he scored 2-3 before the break.

Galway were inspired at the start of the second half and the lead was quickly whittled down but Dublin found their second wind.

Archer was the perfect target throughout and despite a scare after half-time Tom Gray’s side moved ominously towards the Under-20 decider.

Galway captain Seán Mulkerrin opted to play with the breeze in the first half but his side were rattled early.

Dublin looked to play high balls into the Galway full-back line and they profited with a couple of goals from the powerful Archer.

The St Maurs clubman scored a free in the third minute and one minute later Brian O’Leary fielded the high ball from Karl Lynch Bissett and he fed Archer who drove his shot high into Oran Burke’s net.

Galway were reeling and then another speculative ball in was caught by Archer who got past a few Galway defenders and scored beneath the advancing Burke.

It was 2-1 to 0-0 in the sixth minute and Galway didn’t score for another seven minutes. Tony Gill had just sent a shot wide before he opened his side’s account.

Nevertheless, Pádraig Costello quickly added a second Galway point while the Galway goal came in the 17th minute. Harlowe began the move, exchanged passes with Gill and Darragh Silke and placed his finish neatly into the top-right corner.

Galway were within two but efforts from Archer and Ross McGarry (two) settled the men from the capital again.

Matthew Tierney scored his first point and Gill tagged on his second but with Archer and Brian O’Leary both on target towards the end of the half, Dublin took a 2-6 to 1-4 lead into the break.

Costello scored on the resumption and it was the beginning on a five-point blitz from Galway. Rory Cunningham’s second point was the highlight and the teams were level after that in the 42nd minute.

There was more to come and points from Archer and Brian O’Leary pushed the lead out further with Liam Boyle bringing the gap back to a goal.

But there was a hint of desperation about Galway in the closing stages while Dublin picked off the scores.

McGarry, Niall O’Leary, Archer and substitute James Doran found the range and they cruised to a comfortable win in the end.

Pádraic Joyce’s side fell flat in the final quarter and even though they were only three points behind they conceded the final four points of the game.