Kilkenny make final return as they wrap Limerick up in Codyness 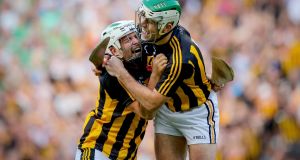 Kilkenny’s essential Codyness would survive a nuclear attack. They drenched Limerick in a tidal wave here and washed away their All-Ireland title with a performance driven by the sort of manic intensity upon which two decades of empire have been built. For 75 minutes of a pulsating evening in Croke Park, they were never led. In fact, after TJ Reid put them ahead in the first minute, they were never caught.

Think about that. Consider the cussedness, the gumption, the raw not-today of it all. Wrap it up in the whip-crack accuracy of their shooting on a day when they had eight wides to Limerick’s 15. They’ve now won each of the last 11 All-Ireland semi-finals they’ve been involved in. This is why.

The names change, the faces change, the Codyness lives on. Reid took man of the match but it could just as easily have gone to Pádraig Walsh or Adrian Mullen. The last time Kilkenny lost an All-Ireland semi-final, Mullen was five years old. Here, he scored four points from play on top of a night of breakneck work around the Kilkenny half-forward line. He’ll get his Leaving Cert results between now and the final but this was graduation day.

For Limerick, the game was a microcosm of a summer that just never ran smooth. They went out like champions, full of effort to the last as they tried to overcome their flaws. They lost Declan Hannon at half-time and John Kiely had to replace Gearoid Hegarty and Tom Morrissey, one as ineffective as the other. That’s three pillars of their All-Ireland gone. No wonder the roof caved in.

When Kilkenny are in this mode, you need all the extras to flow for you. Limerick didn’t have that. Deep into injury-time, Darragh O’Donovan swished a sideline ball at the Kilkenny posts that TV replays showed came off a Kilkenny defender. No umpire caught it and, in fairness, there had been no huge appeal from Limerick. But it should have been a 65, all the same, and we could have had extra time, just like last year. But it wasn’t and we didn’t.

That said, Kilkenny deserved every bit of their victory and they’d probably even have relished extra time. They certainly relished the beginning, wherein they demolished Limerick right from the throw-in. The defending champions were overwhelmed. What to do?

Well, first you survive the avalanche. And only then, only when you’ve done a headcount and made sure everyone still has all their fingers and toes intact, only then do you check the sat-nav to see can you find a way out. Any gameplan Limerick had before throw-in was reduced to ash in the opening 20 minutes as Kilkenny subjected them to a good, old-fashioned waterboarding.

This was Cody’s Kilkenny, in full cry. They hunted and hooked and blocked like demons, everything turned up to 11 from the beginning. They dropped their half forwards back for the Limerick puck-out and proceeded to mince whatever Nickie Quaid sent their way. Walter Walsh scored an early point off scraps around midfield and then another that was all his own work from a lasered Eoin Murphy puck-out.

Kilkenny’s sixth point, coming in the 10th minute, was everything they’ve ever been under Cody. Four forwards gang-tackled Tom Morrissey as he came out with the ball on the Limerick 65, rag-dolling him until the ball screamed for mercy and squirted clear.

Mullen, the newbie 19-year-old playing in his first All-Ireland semi-final, jinked right onto the Hogan Stand sideline and split the posts as though he’d been doing it for a decade. It couldn’t have been a more Cody point had it readjusted its baseball cap on its way over the bar.

Four minutes later, the cherry on top. With the hoosh of a stiff breeze to help, Murphy landed a puck-out down on top of Colin Fennelly on the Limerick 20-metre line. Once it sat in Fennelly’s hand, everyone knew what he had in mind. He muscled Seán Finn out of the way and from there, it was going to be a goal or it was going to be a save. He batted it past Quaid and just like that, Kilkenny were 1-7 to 0-2 ahead.

So. You’re Limerick. You’re All-Ireland champions. The air hasn’t felt this thin around you since that deathless injury-time rush from Galway in last year’s final. What are you going to do? Who are you going to be?

To their eternal credit, they were everything they should be. Bit by bit, they got themselves back into the game. They strung some passes together and started building a total. Aaron Gillane and Graham Mulcahy started making the ball stick and purloined the odd free.

Tom Morrissey whipped a lovely point on 28 minutes after a bit of tiki-taka around the middle and the Limerick crowd roared in recognition. This was the hurling that won them Liam MacCarthy. Maybe it would be what could keep it.

And then, just before half-time, a lifeline. A high ball into the Kilkenny square and full back Huw Lawlor wraps Fennelly in the usual bear hug. Seen it a million times, seen it ignored 999,999 of them. this was the other one. Referee Alan Kelly spotted what was an obvious and silly foul and flung his arms wide. Gillane buried the penalty.

Half-time score, Kilkenny 1-12 Limerick 1-9. Limerick had bunkered under during the blitz but they were out in the sunlight now, still standing. Three points was nothing.

The second half never quit. The two sides traded points as punches and neither revealed an ounce of glass in their jaw. Kilkenny motored on, with Mullen, Fennelly and John Donnelly icing scores to keep clear water between them and their pursuers. When Fennelly scored from yet another turnover in the half-forward line on 61 minutes, it put them five up, 1-20 to 1-15.

Back came Limerick. Shane Dowling came off the bench to plant a mesmeric Federer serve of a goal past Murphy in the Canal End. Soon after, he put David Reidy away to bring the gap back to one. Extra-time looked a cert.

But Kilkenny held out. Late summer and they’re back in a final, their first since 2016.

How does he keep doing it?

Why are we still asking?