Wexford on the march but Tipperary can shoot their way out 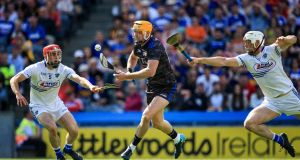 Tipperary’s Seamus Callanan will do well to emulate his goal-a-game average against Liam Ryan who is a good marker inside the sweeper system. Photograph: Inpho

This is how history creeps up on us. Tipperary, the early front runners in a series of powerful displays in Munster and well stacked with All-Ireland medallists plus championship-pedigree management back on board, come into Sunday’s semi-final cloaked in doubt.

Their own nerves might be holding steady but the world at large is inclined to see an ageing team that started the summer in too much of a hurry and is now trying to re-adjust to the juddering reality check of the Munster final and a – flattering! – 12-point defeat by Limerick.

On the other hand the Wexford upswing continues. The only unbeaten team left in the championship, they captured a first Leinster in 15 years and are eyeing up without any anxious twitches a first All-Ireland final since 1996.

If ever there was a time for lines on a graph to cross, surely this is it.

David Fitzgerald’s team have been significantly improved this year. The proof came in the Leinster final when despite the expectation that Croke Park would better suit Kilkenny, Wexford went toe-to-toe with them and conjured the winning phase of a quick-fire 1-1 with 10 minutes left.

In their shock-and-awe start to the year, Tipperary looked irrepressible and their scoring out-strips their opposition by an average of nearly five points a match. The context is important, though. Focus on the scores against Limerick and the average comes down to 1-19, as opposed to Wexford’s 0-23 from two matches against Kilkenny.

The Leinster champions are probably along with Limerick the most physical and athletic team left in the championship and will pose similar, if not quite as demanding, problems for Tipperary.

Aside from the back-loading of playing Limerick twice at the end of the Munster campaign, there is another difference between Liam Sheedy’s side’s highly impressive opening to the championship and this weekend – the season-ending injury to Patrick Maher.

As well as his form having been excellent, he would have had a major role to play in helping the Tipp half forwards to assert themselves physically.

Tipperary’s forwards are however better shooters and scorers and the team have twice as many goals to their name. Séamus Callanan will do well to emulate his goal-a-game average against Liam Ryan who is a good marker inside the sweeper system.

At the other end, Lee Chin has been exceptional not just from frees but also in open play and his energy kept the team grid well supplied in the Leinster final, from his covering back to the attacking link-play.

Have they the weaponry to take this beyond Tipperary’s grasp? Their wides’ total in the Leinster final was an amazingly economic three – as opposed to Kilkenny’s 12 – but they have also been averaging fewer wides per match than Tipperary.

The downside of that is it gives an attempted scores’ average of around 34 whereas Tipp are topping 40.

It leaves the outcome finely balanced but the belief here is that Tipperary can bounce back from two underwhelming performances and their greater scoring yield can carry the day.

Southampton send Sheffield United further into the mire 17:25
Gordon Elliott confirms Denise Foster will take over licence 16:42
Mícheál Naughton appointed president of the LGFA 16:32
Burnley hold on for a point to leave Arsenal stuck in 10th 14:54
Owen Doyle: Culture of ‘clip memory’ among modern referees not cutting it on the pitch 13:30