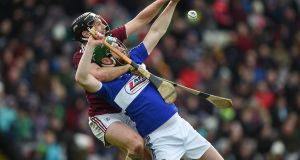 Galway encountered little difficulty in getting their Division 1B campaign off to a winning start at Pearse Stadium as Joe Canning and Cathal Mannion led the way in a decisive victory.

Eddie Brennan’s Laois offered little resistance and while the former Kilkenny star will be encouraged by the way they never gave up and came with a late rally, the game was done and dusted by the time they got moving.

Galway, with Cathal Mannion superb in his new midfield role and brother Padraic dominant as a sweeper at the back, used wind advantage well in the opening half and led by 1-15 to 0-7 at the break.

Canning was once again sublime in a Galway team which started with just four of the side which lined out in the All-Ireland final against Limerick last August.

Davey Glennon got the Galway goal after 25 minutes following a good move which put them 1-12 to 0-4 in front.

PJ Scully hit five frees in the opening half for Laois but their hopes of a good start to the second half were dashed when Galway hit the opening three points after the restart.

The Tribesmen led by 1-24 to 0-9 with ten minutes remaining before Laois finally rallied with Mark Kavanagh leading the way with a string of points.

Corner-forward John Lennon got in for a goal on the hour and the Rosenallis clubman also found the net in the closing stages.

But Galway were never threathened although they lost their shape somewhat after making a string of substitutions.

All six starting forwards found the target on a day when they had ten scorers and manager Micheal Donoghue will be expected to experiment further next week when they head to play Carlow.