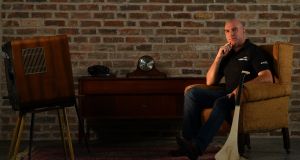 The players arrive togged out in their own cars at the MW Hire Kilkenny training pitch, out the Castlecomer Road, only allowed to share the drive if they’re from the same household.

At the entrance there’s a face-recognition temperature check, measuring their current against previous levels, and if they’ve already had the slightest cough or sniffle then they stay at home and report it to the team doctor.

Because Nowlan Park is off limits, all dressing rooms out of use, there are two marquees set up at either end, half the players designated one end, half the other end, and it’s a one-way system in, the same on the way out.

All the hurls and balls are sanitised in advance; there is no team huddle, no face-to-face talk, and all the management wear face masks and if they want any physio before or after, that’s booked in advance too.

When training is done, players change into freshly-cleaned gear inside the marquee, drop their wet gear into a dry-cleaning bin, grab their takeaway dinner from another small cabin and then drive back home for a shower, before the entire cycle is repeated inside the next training bubble.

None of which was ever imagined when DJ Carey signed up to become a selector on Brian Cody’s senior hurling management team this time last year, only for now the five-time All-Ireland winner and nine-time All Star wouldn’t have it any other way: if this is what it takes to see out a championship in 2020 then Carey is all for it.

“We are doing everything possible to make sure it can happen, and I’m sure most other teams, if not all of them, are the same,” says Carey, the 49 year-old still as enthusiastic for the game as ever. “And if we are asked to do something, we will do it to the best of our ability. I’m sure accidentally there will be slip-ups along the road, but that will be accidental.

“We’ve had two of them so far of which the following night they were back, they were fine, there was nothing in it. But it’s absolutely ‘best behaviour’. Accidentally something could go wrong, who but we’re doing our best.”

Speaking on Zoom at the launch of the EirGrid official timing partnership with the 2020 championship – another reminder that for now it’s still all systems go – Carey isn’t yet convinced that all matches will run off smoothly, especially if one or more teams produce a positive Covid-19 case.

What Carey does believe is that it’s right to continue with it, even with the uncertainty about what level of restriction is to come. Kilkenny await the winners of Dublin and Laois, a week after that game, on October 31st.

“Certainly, we had a challenge match on Sunday, preparing for a Leinster championship, to all of a sudden talk of the whole thing being in lockdown again.

“But we’re hopeful. You are kind of nearly going to bed at night-time with news on, you are getting up in the morning with news on to see what’s the latest. We’re also trying to plead with people, we’re asked to do things, and maybe it doesn’t suit you to do them and maybe you’re saying ‘this is bull****, we shouldn’t be doing it’. But if we can do the simple things, like, do we need to celebrate? Do we need to go on the field when you know you’re not supposed to?

“That’s why I suppose the GAA have come out and made this decision with the club situation, because I would imagine they are looking at it saying ‘we want to have an inter-county season and we won’t have one if this thing keeps going as it is.’ But there is definitely no worry with getting players up to a level or to be motivated because as far as we’re concerned we’re looking at the weekend of October 31st.”

Still there is that danger of a county unable to fulfil their fixture, should a coronavirus case arise, and in that instance Carey reckons every measure should be taken to allow them continue.

“I think every county that’s involved now, there should be a little bit of time given. It’s going to be very awkward, if a team comes down with the Covid, to put it back two weeks. I, for one, think it would be reasonably empty if we were the beneficiaries of an important match because a team has gone down. You can do your level best and be very unlucky. If the Government comes out, or the GAA comes out, and say it’s not going to happen, we have to accept that. It’s as simple as that. But I think it would be a big downer for people if it’s not to happen, we have to do everything in our power to make sure that it does go ahead.

“And you will hear the likes of Brian Cody, the likes of Davy Fitz and those guys who are on the sideline, more than in the usual way, because there will be no crowds shouting. As far as I am concerned if we can get something going, that would be brilliant, and it won’t be to the detriment of the health regulations that are out there.”