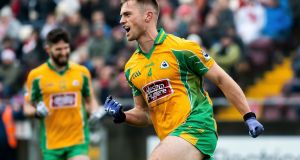 With the intercounty championships looming into view, the extraordinarily vibrant club season provided more fireworks at the weekend.

There were contrasting fates for the reigning All-Ireland champions with Ballyhale Shamrocks effortlessly cruising to three Kilkenny hurling titles in a row by blitzing Dicksboro 5-19 to 1-10.

But in arguably the biggest upset of the season to date, football kingpins Corofin, who earlier this year became the first club to win three successive All-Irelands, suffered a first defeat in 50 matches in the Galway semi-finals. Mountbellew-Moylough put in a strong second half to consign the seven-time champions to defeat for the first time since 2012.

Coincidentally that was also a significant year in Dublin where Ballymun Kickhams were winning their first title since 1985. As the home base of a number of the county’s serial All-Ireland winners, the club has faced the charge of under-achievement in the eight intervening years.

Manager Brendan Hackett addressed the point after his team’s emphatic defeat of champions Ballyboden St Enda’s by 1-19 to 0-8 at Parnell Park.

“Yeah but the county have got the best out of those players. Declan Small [the late former club chair and father of Dublin players John and Paddy] said to me when I met him the first day, ‘Those guys that you see in July and August are going to be spent by the time they get back to you in September,’ and they were very prophetic words.

The championship was essentially won by a power play after the first-half water break when Ballymun outscored the champions by 0-7 to nil for an irretrievable lead of 10 at half-time, 0-14 to 0-4. This also had been part of the plan, according to Hackett.

“If you were watching our previous two games we actually switched off in the second quarter so we targeted it. We stayed out on the pitch, no talk, and we were just ready to go. Second quarter was the one we really went after today.”

Another big influence was restarts. Ballyboden were missing their first-choice goalkeeper because of suspension and their kick-outs were ransacked whereas Evan Comerford kept the new champions going forward with the accuracy of his kicks.

Again, the time together offered by the strangeness of this year’s season had been an influence, according to the manager.

“We’ve had a lot of time together with everybody. As I’ve said, in previous years the lads are coming back 10 days before a quarter-final. It doesn’t matter who you are it’s very, very difficult to integrate any player into a kick-out set-up and forward formation. We’ve been playing together now since June and the signs were out there.

“I’m thrilled, both for the players and everybody in the club because for years there’s been near misses and there’s always been an excuse whereas this year I said at the start it’s going to be the toughest Dublin championship ever because every team was fully fit, all the players.”

Hackett also had time to join the chorus of all county-winning managers in trying to resurrect the provincial and All-Ireland championships, which have been parked for this year.

“I heard something on the radio today coming in that a few clubs are starting to make noise about maybe January or February you could run it off fairly quickly. In the early part of the championship there was a game every 10 days.

“But then people are saying that players need a break too so, what do you do? But yeah, it would be lovely to play. The way we’re playing now I’d love to test ourselves out against the clubs from other counties and provinces if we got that far.”