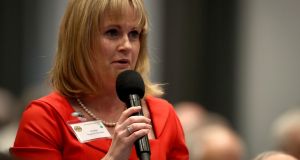 Tracey Kennedy, chair of Cork GAA: ‘Each of us has to take responsibility for our own actions. It’s easy to blame a club, but none of us have to attend games or attend celebrations.’ Photograph: Oisin Keniry/Inpho

The club, better known as the Rockies, won their 33rd Cork Senior Hurling Championship when they defeated Glen Rovers by 4-26 to 4-18 after extra time in front of just 200 people in Páirc Uí Chaoimh on Sunday afternoon.

However, there was anger later after social media footage emerged of the team being greeted by fans outside the clubhouse on Church Road with widespread breaching of social distancing guidelines.

“We asked clubs to remind their own members that they should not take part in any post-match celebrations that would be in breach of the Government guidelines,” said Tracey Kennedy, the chair of Cork GAA.

“But personal responsibility is a huge theme in all the guidelines and each of us has to take responsibility for our own actions. It’s easy to blame a club, but none of us have to attend games or attend celebrations.

“Cork GAA did our best to enforce all the regulations on social distancing at the finals, but what happens after the games, each club has their own responsibility for managing their own arrangements.”

However, the county board at this point has no plans to sanction any club for breaches of Covid-19 guidelines, and it would have to seek advice from Croke Park to see if it could sanction a club, she said.

Blackrock GAA were unavailable for comment, despite repeated attempts. Local Fine Gael councillor Des Cahill said the on-street celebrations were disappointing, but not an intentional breach of the rules.

“Blackrock is the same as every other parish in the country and obviously, after winning the county after a lapse of 18 years, emotions got the better of people and they didn’t maintain social distancing, which was disappointing.”

The club had been fastidious in its pre-match Covid preparations. “Unfortunately, emotions ran high after the win and the guidelines weren’t complied with out on the street,” said Cahill.

By contrast, however, North Cork GAA, Charleville confined the celebrations of their Senior A hurling win over Fr O’Neills in Páirc Uí Chaoimh to a largely online event.

“We thought, what happens if they win? So we had the plan in place that if they won we would do it online. We had provisionally booked the contact for online streaming,” said Aileen Browne, chairperson of Charleville GAA.

“So the players came back to the clubhouse after the game for a meal and we did a livestream on our Facebook page where we brought the lads into a separate room and introduced all the squad and did a few group interviews.

So far, the stream has been watched by more than 1,000 people. Later, the players left the clubhouse at 7.05pm and paraded the cup for about 400 metres to show it to club juveniles.

“All the juveniles came in with their flags and their families and it only took a few minutes. I’d say it was over in less than five minutes and it was only promoted among the juvenile members and was for their benefit,” said Browne.