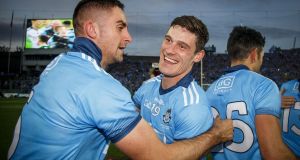 “I’m me and nobody else. Whatever people say I am, that’s what I’m not. Because they don’t know a bloody thing about me.” – Saturday Night and Sunday Morning (film version).

It was always going to end like this for Dublin and Dermo: a low-key departure from the scene delivered with thrillingly off-beat timing and a haze of questions hanging over the plaudits and the dazzling highlights reel he leaves as his legacy.

In this bewildering year, the retirement of Diarmuid Connolly from the Dublin squad just weeks before the resumption of the strangest season in living memory is a small but significant gunk for any fan of the game because he was a true touch of stardust and unexpectedness who would, sooner or later, have sent an electric surge of life through the championship and through the republic.

But then, the best thing about Connolly is that he leaves the stage just as he entered it way, way back in 2007: a figure who defies easy characterisation not because he tried to cultivate an aura but simply because he marched to his own drum. Whatever people thought of him, good or bad, was up to them: he wasn’t saying.

In fact, one of his very few audio interviews on record happened four years ago when Connolly duly turned up to fulfil his media duties as St Vincent’s captain before the Dublin club played Rhode in that year’s Leinster club final. Among those with the microphone and recorder was the former Laois footballer turned broadcaster/provocateur Colm Parkinson, who informed the sceptical Connolly that that the moment was as rare as a sighting of the Loch Ness monster and that it was ‘great’ to finally interview him. And straight away, the exchange turned memorable.

“Oh really, yeah? Why is it great?” Connolly responded in a tone that was many things all at once: amused, challenging, engaged, spiky and, most unexpectedly of all, interested.

Parkinson pointed out that Connolly didn’t do many interviews and asked him why not?

What followed was a conversation which was essentially about the uncomfortable grey area between having a national profile as the best footballer on a Dublin team hurtling towards the summit of the most successful of all time and having to conform to the general assumption that therefore you are a public figure.

It’s clear, over the sparky exchange that Connolly has never regarded himself in that way: that he was just a fella who plays for the Dubs. But because of his brilliance, because of his longevity, because of the combustible streak that led to several intensely covered disciplinary issues, because of the coverage over a court case generated because of his profile as a footballer, because of the deluge of publicity and commentary which followed his 12-week ban in 2017, Connolly has had to deal with the baggage of being a public figure despite doing nothing to endorse it – besides breaking the borders of genius at football.

“Well that’s a statement!” he marvelled, sounding genuinely indignant when Parkinson suggested that it was precisely because the public didn’t know Connolly that they felt emboldened to make judgments of him, condemnatory or otherwise.

“You’re entitled to make a judgment on me because you don’t know me?!”

It wasn’t just the rarity of the interview that made it memorable. This was a scheduled promotional event; one of hundreds of sponsored GAA interviews organised over the course of the season which are, as a rule, staggeringly bland and safe.

It would hardly be surprising if Connolly wasn’t asked to front many of these gigs precisely because he was liable to speak his mind. And because even as the Dublin football squad finessed its reputation for imperturbable, unbeatable coolness, Connolly remained, to those of us looking on from the outside at least, a figure slightly apart. That’s not to suggest he wasn’t a terrific team-mate or enjoyed the fun in the dressingroom. But through the years he retained a streak of independence.

From his appearance in the Leitrim warm-up top in the red-carpet formalities before the 2011 All-Ireland final (his brother hurled for the county) to his striking cameo in the sleeveless singlet prior to last year’s final, there has always been the sense that some part of Connolly, consciously or otherwise, couldn’t fully give into the idea of uniformity.

It is easy to forget that he had decided not to participate in Dublin’s bid for five successive All-Irelands last summer and had planned to spend the summer kicking football in the Bronx for the ‘Donegal’ team. There was no explanation given for the decision but it takes a fiercely independent mindset to walk away from the prospect for such a monumental season.

Unexpected and, for Kerry supporters, infuriatingly – visa difficulties scuttled the trip – another example of the events of a private citizen spilling into the public domain. And from the moment the news broke that Connolly would be staying in Ireland, there was an inevitable sense that he would play some kind of crucial role in the championship. He was used sparingly by Jim Gavin over the past three years and his presence on the substitutes’ bench was the definitive proof of Dublin’s abundance: he would have been a gilt-edge starter on any other team on the country and when he did step in for the crucial minutes last year, it was as a composed, settling figure.

Because for most of the last decade Connolly has occupied with Michael Murphy the lonely space of being in a different realm to the rest, circling the orbit of the championship in a most unacknowledged truth that they could do things with a football that even the best of the rest could not match. As has been remarked on, two All Star awards is a mystifying representation of his influence and brilliance.

And it’s one of the delightful eccentricities of the GAA that thus far, two of the brightest ever virtuosos have passed through a full decade without either receiving the Footballer of the Year award. Now Connolly, at least, never will. But then, Connolly’s gifts to the game was never measurable by conventional standards or ran along expected lines.

In fact, his peerless hour is arguably that losing game against Murphy and Donegal in 2014 when, virtually alone in the blizzard of counterattacking chaos magicked up by Jim McGuinness, he remained composed and focused and basically unmarkable. Who will forget that point of his deep in the second half which caused Donegal blood to turn cold with the alarming thought Connolly might just be bloody-minded and brilliant enough to go and win the game on his own?

And now, he is gone. He belongs to the few sports people whom you hope would produce an autobiography and who almost uncertainly won’t. In fact, he’d probably find the notion laughable. One final nugget from the brief conversation with Parky, who with one eye on mischief informs Connolly that when he first played for Dublin, he was a bit ‘flighty’.

“I was also 18-years-old,” Connolly pointed out.

Well, he is 33-years-old now and is entitled to get to the business of living his life. He leaves a unique streak of phosphorescence over Croke Park that will hold in the sky long after this era of Dublin splendour has passed. My bet is that we’ll never hear from him again.

1 Seán O’Brien: Anger over my parents’ break-up never left me
2 Six Nations - Ireland v Italy: Kick-off time, TV details, team news, standings and more
3 Ireland out to make a bold statement of intent against callow Italian side
4 Andrew Porter: 'There’s not a day goes by when I don’t think of her'
5 Disciples of Brian Cody spreading the word
Real news has value SUBSCRIBE