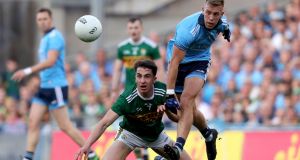 It is at least something new for Jonny Cooper, Dublin’s two-time All Star defender and probably the All-Ireland champions’ most versatile back, who is at home more or less anywhere in the jerseys two to seven as well as playing the role of sweeper.

After five championships making history, he has, together with the rest of the world, been adapting to a new reality.

He’s fairly Zen about everything, content to follow protocols on Covid-19, wishing well departing colleagues Jack McCaffrey, his fellow defender who stepped away for the county team earlier this year, and selector Paul Clarke.

But it has been disruptive.

No sooner had the year started under new management, his old club mentor at Na Fianna Dessie Farrell taking up the reins of the county, than it was over, unplugged in response to the sinister, morale-sapping pandemic that has shaped life in ways unimaginable less than 12 months ago.

“So I think that’s the first thing,” he reflects. “When a new coaching group comes in, you get that sense and then you’re trying to figure each other out, for want of a better phrase.

“You put the head down and put in the graft. Unfortunately it got stopped dead when we were in a bit of a flow. But we’re certainly getting to know each other better as a team and as a coaching group the last few weeks.”

In common with intercounty players around the country, Cooper is simply relieved to be back at all given how bleak the landscape looked a few months ago when any prospect of championship appeared to be a pipe dream.

“It’s been a bit like being a kid again, running onto the pitch and enjoying the football for what it is. I haven’t seen some of those lads for weeks or months.

“We have some training to get under our belts. We’ve a few weeks to get up to speed but I think everyone is in the same boat.”

He had the high-wire experience of having to watch the team-mates cope for most of last year’s All-Ireland final without him after picking up a red card for persistent fouling in a doomed attempt to mark Kerry danger man David Clifford. The team just about drew and restored for the replay, Cooper was there to contribute to racking up the five-in-a-row.

Troubled last season by a prolonged bout of plantar fasciitis, the debilitating foot injury, he sought the help of internationally known physio Ger Hartmann to get back for the business stages of last year’s championship.

“It’s a runner’s injury, more so than some of the GAA sports. Obviously Ger has massive experience, world-renowned. He’s come into contact, not just with the injury, but with many athletes with the injury. So we used him a couple of times and he was very good to give us his time.

“It’s on the sole of the foot. It’s just an awkward one, more than anything else. You kind of have to play ball with it. There’s not a massive amount you can do with it at certain stages, so it’s frustrating at times.”

Counties are back in training just over a week. There are obvious contrasts with a normal summer’s championship preparations.

After a pleasant, if unyielding, summer with the club – he was involved with Na Fianna’s hurlers as well – Cooper is enthusiastic about the temporary restoration of the old sudden-death format.

“What I like about it is there’s no safety net. You’ve often seen any championship or any sport in general when it’s all on the line, you know, you tend to get a little bit more of a rawness to it sometimes. You could be knocked out the first day and that could be the end of that, unfortunately, but I’m looking forward to it. I think it’s a great format.”