Galway lay down a marker as Wexford look to the future 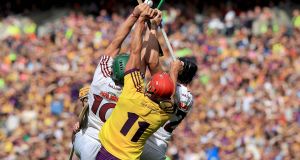 “Their side fell in the end to a 0-29 to 1-17 beating but this will still be the summer when Wexford hurling was reborn.” Photograph: Donall Farmer/Inpho

One by one, Galway keep knocking over the ninepins. Three games played, three flat-tracks bullied right and proper. So far this summer, Galway have specialised in reminding underdogs why they are who they are, averaging 32 points a game. You want romance, go see a movie. You want an All-Ireland team in a year when the field is flat, Micheál Donoghue’s side have the strongest claims to date.

The biggest crowd ever to pay through the gate for a Leinster final came to Croke Park, buttressed by a huge Wexford support among the 60,032. As Davy Fitzgerald noted admiringly afterwards, even with Galway long safe and the game going into injury time, the stadium was still full. Their side fell in the end to a 0-29 to 1-17 beating but this will still be the summer when Wexford hurling was reborn.

For long spells in the first half here they were every bit the match of Galway. The sides were level seven times in the first half-hour, a reflection of a game that see-sawed incorrigibly through its opening period. But Galway got the last four points of the half and when Conor McDonald missed a penalty five minutes after the restart, Wexford were like a hospital patient hanging on the doctor’s word for any scrap of good news.

Galway brought only bad tidings, however. Throughout the third quarter they brutalised Wexford in the air in every sector of the pitch. Conor Cooney was the clear man of the match, ending the day with seven points from play. Joseph Cooney wasn’t far behind, stitching five of his own.

In defence, John Hanbury, Daithí Burke and Pádraic Mannion were delighting in plucking balls from the sky, each of them another swat across the Wexford cheeks. Between the 30th minute and the 50th, Galway went from being a point down to nine ahead. That was the game.

[/CROSSHEAD]“When you have that momentum and you’re looking good, it’s a lot easier to catch those balls,” said Fitzgerald. “I could tell that we were half-doubting ourselves at times. And when you’re doubting yourself, you’re not going to contest those balls the way you need to. They didn’t catch a whole pile of them in the first 20 minutes, you know. So when we lost our way a small bit, that’s when they capitalised.

“I’m not downbeat. They kept fighting away at the end no matter what. They were running at them and trying like anything to get scores. They’ll be okay, I don’t know what will happen for the rest of the year. We’ll go out and give it everything and fight like anything. But I’ll tell you them guys have stuff, without a shadow of a doubt.”

For Galway, it was a professional day’s work. Having size throughout the pitch is one thing, using it to full effect is another. Joe Canning was overshadowed for much of the first half tracking Matthew O’Hanlon back up the pitch. But he kept chipping away from placed balls, ending the day with eight frees, a 65 and a sideline cut.

Amazingly, Canning didn’t have a shot at the posts from play all day. And Galway still amassed 29 points and won a Leinster title pulling up, thanks in the main to their physical dominance and the scoring prowess of the two Cooneys.

“The two of them, in fairness, were absolutely savage,” said Donoghue afterwards. “That’s the beauty of the team at the minute. On different days different fellas are stepping up and the fellas who aren’t getting on the scoreboard are just working hard for the team. Thankfully the two boys had their shooting boots on today.

“I thought the first half we did okay but I think we went away from what got us here and you have to give Wexford a lot of credit for that. At half-time the message was just to go back to ourselves and try impose ourselves. I thought for the first 10 minutes of the second half they were very good.”

That they were. And that they are. We presume in our blitheness that this is a summer with no outstanding team. Galway have five weeks now to go away and mine that insult for all its worth.