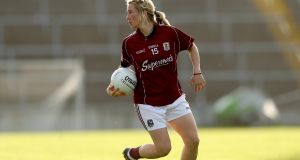 Leonard and Seoighe were responsible for 2-11 in total. Leonard scored nine points, including two from play, as Seoighe chipped in with an impressive 2-2.

Mayo, beaten All-Ireland semi-finalists last year, were desperately below-par and now face a difficult route through the qualifiers, as Galway take the direct road to the quarter-finals.

Ahead 3-7 to 0-4 at half-time, Galway never looked back, and while Shauna Howley’s goal in the 38th minute briefly hinted at a Mayo revival, it never materialised.

They were unlucky when Fiona Doherty rattled a shot off the crossbar soon after, while star forward Cora Staunton tested the woodwork with a viciously-struck free later in the half, but Galway were deserved winners.

Galway’s three first-half goals paved the way for victory, with the team taking full advantage of the breeze at their backs, in front of a big crowd in Castlebar.

After Galway streaked two points clear early on, a poor restart by Mayo led to a goal by Seoighe in the third minute.

In the fifth minute, 2004 All-Ireland winner Niamh Duggan, who was briefly on the pitch as a blood sub, made a huge impact, as she netted to finish a flowing move involving Aine McDonagh and Seoighe.

Galway missed other goal chances in the first-half as they carved Mayo open, but their third arrived in the 25th minute, as Seoighe struck again.

Mayo struggled in that first-half, registering just four points and one from play, from Sarah Rowe, with Staunton landing three frees.

When the dust settled, a usually-slick Mayo outfit had managed just 1-2 from play in the entire game - as Staunton top-scored with seven points.

Crucially from a Galway perspective, the off-colour Mayo ace managed just one point from play in the match, a late effort when the end result was not in doubt.

Galway would finish the game with 14 players when Noelle Connolly was sin-binned in the 55th minute for hauling down Staunton - but Glennon’s charges managed to cruise comfortably to another Connacht win.

Olivia Divilly claimed the player-of-the-match award and, on this evidence, Galway could emerge as serious dark horses for All-Ireland glory, in what looks like an open field this summer.