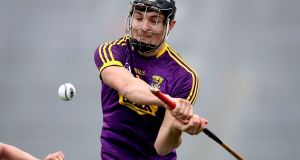 Jack O’Connor: “I love playing, I love championship matches. That’s what I train for, and this is what’s going to be the end product.” Photograph: Ryan Byrne/Inpho

They say the secret to any sporting success is to choose your parents wisely, only Jack O’Connor is not so sure. Hurling, he reckons, is in his spirit as much as his genes.

O’Connor’s father John was on the Wexford hurling team that last won the All-Ireland in 1996, together with John’s brother, George – and their father, Paddy O’Connor, was a standout Wexford junior midfielder in the 1940s. Clearly there’s some hurling in the blood.

His ties with Wexford hurling also go beyond that, as he was the team mascot exactly 20 years ago, when Wexford beat Kilkenny to win the 1997 Leinster title (he actually repeated that role in 2003, when Wexford lost that year’s final to Kilkenny).

Although it’s only now, just out of under-21, that O’Connor is starting to make a name for himself as one of the standout half forwards in Davy Fitzgerald’s Wexford hurling renaissance – and Sunday’s Leinster final against Galway should offer further proof of that.

What got him this far is his love of the game, however, with or without that family tradition. O’Connor also dabbled in rugby and soccer as a youngster, before destiny eventually took charge.

“I think I always knew I’d get into the hurling,” he says, “but just enjoyed the craic I had with rugby and soccer and other things when I was younger. With John and George there probably was a bit of destiny there, but it’s a choice.

O’Connor also credits Liam Griffin, Wexford’s 1996 All-Ireland winning manager, for encouraging him along the way, especially as his thin frame wasn’t immediately encouraging to other mentors at the time.

“When I was nine or 10 years of age, he [Griffin] had me doing bits and pieces against the hurling wall in November. That’s where it all came from.

“And I can remember being a mascot for the 1997 final, I was totally into hurling, playing up against the wall and all of that. From nine to 14, I wasn’t as big as the other chaps, I didn’t make the under-14 panel and barely scraped onto the U16 panel, and then came into it at minor.

“But there was a big influence in hurling in the household, my father and my uncle and people in the club, friends and family. I also played a bit of rugby when I was younger, but when I got to minor, my body started filling out a bit more, that’s when I made a choice to go playing hurling instead of staying with the rugby.”

There’s some modesty here, as O’Connor did feature quite prominently in rugby, playing outhalf with the Wexford Wanderers, as well as with South Leinster, just couple of years behind Tadhg Furlong.

Success with both his club, St Martin’s, and at under-21 with Wexford, has provided the experience, and he also played senior last summer under Liam Dunne, the highlight being the qualifier win over Cork, when he featured at midfield.

Then everything changed with Fitzgerald’s arrival, O’Connor admitting that ambition and confidence has been soaring since the Clare man took charge.

“When Davy came in, he made clear what he wanted to do with us, to get us into winning ways, winning habits. It took a while to start believing in that, but when he got us on board we started to see the results coming.

“In December I would have been laughing, if you told me I’d be playing in a Leinster final, but come January we had it straight in our head that we had a chance of winning and progressing in the league, and we were eyeing up the Leinster championship.

“I think even before that, at under-21, there was a serious bunch of underage chaps coming through, and now there are six or seven, started against Kilkenny. So there was something coming through in Wexford, and now it’s starting to show. The Cork game, last year, just showed that when we put our mind to any game we can win it, but this year we’re trying to show it consistently, game by game.”

He retired early in that semi-final win over Kilkenny, but is fit to start for Sunday: “Against Kilkenny, we were quietly confident. We knuckled down, did our homework, stuck to the game plan on the day. We kept doing what we had to do, even when they hit us with a goal.

“Galway are a fantastic team, they’re the team to beat this year, so it’s a big challenge. They’re the games you want to play. People are on a high, there’s a real buzz in the county, they haven’t had something to celebrate for a long time. I see that in my mother and father and uncles, that age group, it’s great to give them something to cheer. And more to come, hopefully.”

Indeed there is: his younger brother Rory. “I don’t say it to him but I’d say it to others, he’s nearly the best of all of us.”

Which in a family such as the O’Connors is high praise.